Civil war in Paris and nuclear accident in France are hoaxes

“Alternative media” were spreading a one-year-old video depicting France as a war zone. This is the weekly overview of the hoaxes that appeared this week. 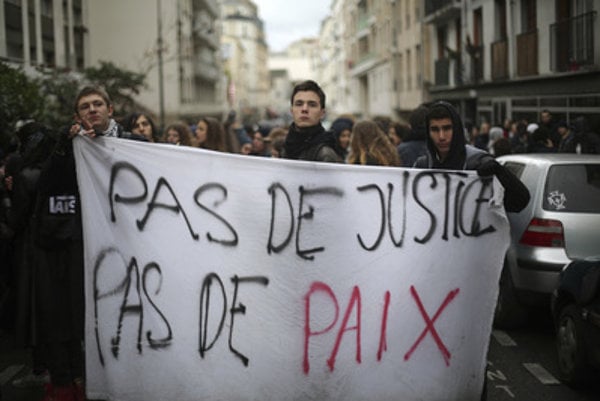 A conspiracy magazine suggests that there is a controlled attempt to oust the president going on in the US.

The Magazine Zem a Vek (Earth and Age) wrote on February 19 that Donald Trump’s administration has been attacked by part of the secret services, neoconservatives, and military industry complex.

The recall of the president’s aide for national security, Michael Flynn, too should be proof that an attempt to remove the president is taking place in the US. The article suggests that “secret services cooperating with traitor mainstream media” are behind Flynn’s resignation. This should be namely the NSA, which intercepted Flynn’s conversation with the Russian ambassador in Washington Sergey Kysliak, and subsequently leaked the recording to the “cooperating media”.

Reports by WikiLeaks allegedly support these claims too: “Trump's National Security Advisor Michael Flynn resigns after destabilisation campaign by US spies, Democrats, press” and Foxbusiness: “Everything is based on the attempts of some people from the intelligence services to marr any positive relations between the US and Russia”.

None of the quotations (Wikileaks and Foxbusiness) was possible to find, however, except for a WikiLeaks tweet that was not supported with any documentation proving the claim.

The overall composition of the text should create the impression that secret services, military lobby, non-governmental organisations, and “traitor” media are behind everything and that they should prevent Trump’s administration from “scrapping sanctions” and applying milder rhetoric towards Russia. The statements of Nikki Haley, US Ambassador to the UN, and Sean Spicer, the White House spokesman, about how Russia must return Crimea to Ukraine, are ascribed to the pressure of the media.

The text goes as follows: “Spicer during the press conference coped with the attacks of the journalists first, but in the end he let them push him to the corner with all probability, when he said that Trump expects that Russia will return Crimea to Ukraine, which was immediately picked up by the global mainstream and started spreading Spicer’s statement as a direct statement of the president”.

This claim cannot be considered relevant. The White House spokesman and the US ambassador to the UN present the official stance of the president and his administration and it is improbable that any of them would be “pushed in the corner”.

(By Tomáš Čížik, director of the Centre for European and North-Atlantic Relations)

A hoax about an alleged accident at a French nuclear power plant promptly reacted to the otherwise true information about the occurrence of radioactive iodine above Europe.

The report was spread by several conspiracy websites, some of them even joined the call on people to purchase iodine pills and dosimeters as soon as possible.

The articles tried to compare the situation with 1986 when socialist governments kept silent about the disaster in Chernobyl. People thus did not know what measures to take for their own protection and therefore the number of those who were affected unnecessarily increased.

The paradox is that governments of the western countries did nothing of the sort even back then and informed their citizens about the explosion and the steps to be taken for protection.

The hoax linked two events that are not connected. There really was a fire in the French nuclear power plant Flamanville on February 9, but the local authorities immediately informed that there was no threat of explosion or leak of radioactive substances.

And yes, the radioactive iodine was really measured above Europe and there is not much information about its origin, but it likely came from some of the factories producing pharmaceuticals.

The first reports about the iodine in the air did not come from France at all, but rather from Norway. The local authorities did not inform about it because the amount of the substance in the air was so small that it does not cause health problems. In addition, the half-time of decay is eight days for iodine 131. The news, however, made it to the public anyway.

Read also:Shortage of vegetables in Europe’s supermarkets is a hoax Read more

Civil war in France, part I

A hoax entitled “Demonstrations leave France on the brink of a civil war” was one of those that use true information and insert it in a deceitful context.

Several websites reacted to the demonstrations in France and depicted them as the start of a civil war that they also linked with immigration in Europe. In France, protests against police violence really took place. It was due to accusations that police officers raped a young man named Theo with their baton. All standard media informed about the accusations and about the protests. But the protests were far from being a civil war. “Alternative” websites additionally linked the protests with immigration. Most protesters were French citizens, however. The protests against police violence were also joined by anti-racist organisations and nationalist politician Marine LePen called on the government to ban the protests out of respect to the police corps.

The articles also claimed that France relaxed rules for using shotguns. By that they probably meant the fact that police officers may carry weapons also outside service. This rule emerged after terrorist attacks in November 2015, but the rules for civilians remained unchanged.

Czech server Parlamentni Listy also came up with an exemplary half-truth. It too concerned the unrest in France and the truth was again somewhere else.

The server published a video with only one text, “This is Paris”. It showed street protests, a blocked road, fire and clashes with the police.

In just the first three days after it was published the video gained almost 200,000 views, 3,400 shares, and more than 250 comments. Most of the commenters linked the video with the refugee crisis, some accuse “mainstream media” that they did not cover the event on purpose.

Only a few commentaries stated that the video was an exemplary hoax. It is one year old and it has nothing to do with refugees. It is a footage of the protests of Paris taxi drivers against Uber, from January 2016. The protest of taxi drivers was then part of a wider nation-wide strike of public servants who were protesting against the reforms to labour laws.

Parlamentni Listy at first sight did not lie at all, only did not state the real content of the video and let their audience on Facebook to interpret it.

Most of them immediately linked it with refugees and the video started living its own, albeit deceitful, life.