Slovak presidency changed but did not stop SNG reconstruction

More a year ago, reconstruction on the Slovak National Gallery in Bratislava was launched. The Slovak Presidency of the Council of the European Union in the second half of 2016 did not stop them but did, however, require changes in the project. 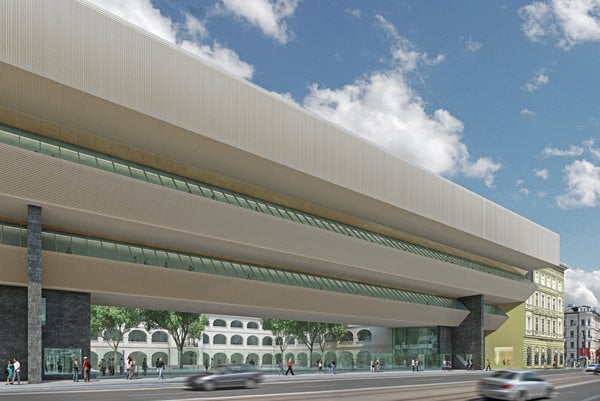 At the beginning of 2017, the works gradually changed from the demolition to building phase.

“The gallery is in a state that its own mother would not recognise it,” said head of SNG Alexandra Kusá, hinting at a popular Slovak proverb.

A few years ago, freezing temperatures – like those that have hit Slovakia recently – made the relative humidity in some rooms of the national gallery reach figures that caused some of the Gothic artwork to crack. This was the last straw that forced SNG management to completely evacuate works of art from the main building, the Sme daily wrote.

It took several years until the government finally approved the reconstruction of one of the most important state institutions – whose residence in Bratislava includes the historical Water Barracks remade in more modern style, the also old Esterházy Palace, the bridging connecting them, as well as a functionalist administrative building and the inner space formed by them. After it finally began in 2016, the reconstruction seemed to be threatened by the Slovak presidency later in the year, as the works were supposed to be halted due to security measures and the fact that many events were taking place in the downtown area of the capital. The work was able to continue, though mostly inside the complex. 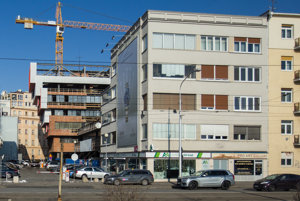 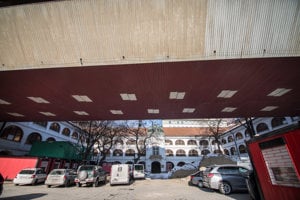 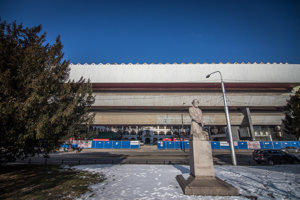 “The schedule of works had to be adjusted; but this does not mean they were stopped,” Kusá said, as cited by Sme. “We could not use the crane whose arm was so huge that it would have reached all the way to the Reduta building [where the core of events of the Presidency took place],” Kusá said, adding that the excavation and demolition works in the interior of all buildings, including the most complicated bridging could have been done anyway, and that the presidency had no serious impact on the overall course of reconstruction. One impact was that access for trucks and cars was limited, with a delay of a few hours.

“Concerning what could have happened, we survived the presidency actively,” Kusá said. “It is crucial that the works did not stop – as it would be very difficult and frustrating to stop and re-start such a huge giant."

No facelift but fundamental change

The presidency may have caused the reconstruction to be more expensive – but this will be only be clear after investments are re-calculated, and SNG will finish it and file for evaluation by the government on March 31.

“Each change during construction has its price – and we will see how much this will be in our case,” Kusá adds. Of the almost half a million euros allocated for reconstruction, so far more than €4.5 million have been invested; i.e. about 12 percent of the volume of finances have been spent on construction.

The bridging was in the worst state of emergency. “Now, it is in a state that even its own mother would not recognize it,” Kusá noted, adding that inside, the space is totally stripped, only floors and ceiling have been left. All old cabling and mains, and all old fillings have been removed, exposing the ferroconcrete framework which needs to be treated, coated and then wrapped in a jacketing. Air conditioning and lighting should also be properly solved.

“This is no facelift but really a last radical reconstruction with the aim of making the buildings functional,” the SNG head explained. She added that after the works are finished, it should offer the level of comfort seen abroad: a café, a vista, social spaces and exteriors open towards the vicinity.

As for materials used, a lot of them will be recycled materials from the 1970s – or used in an innovative way to remind of the original building. This is a more respectful way of perceiving construction, currently very common: the origin of the building should remain visible but the building itself should get a new, contemporary “haircut”. 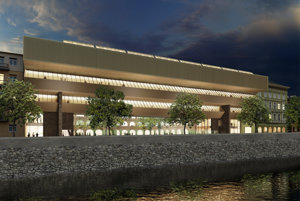 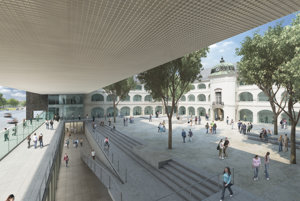 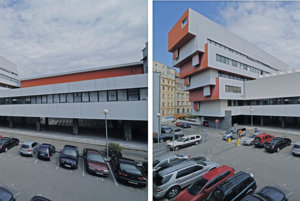 Visualisation of the Slovak National Gallery after reconstruction (4 photos)