Is Visegrad on its way out of Europe?

The V4 project has veered from its original purpose, never mind the positive, if idealized, concept of Central Europe. 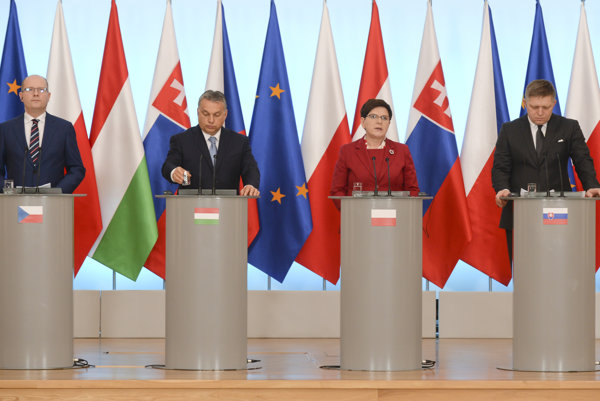 I was fortunate to moderate an interesting discussion in Prague this past week. Put on the Association for International Affairs AMO) and the journal Visegrad Insight, the rather provocative if slightly opaque question was: Has the Visegrad Group killed Central Europe?

Though somewhat coded, the title of the event is an indication of the negative connotation that the Visegrad Group now has elsewhere in Europe. For many elsewhere the V4 is exclusively associated with opposing EU green energy policies, rejecting plans to resettle war refugees and spouting irresponsible political rhetoric. In the meantime, the stereotype goes, the V4 are happy to collect as many subsidies as they can from Brussels to build new highways, train stations and so forth.

That is contrasted with the concept of Central Europe, which is a much more vague but idealistic idea of the region. As one speaker at the event this week, Marcin Zaborowski of Poland, noted, this idea was perhaps best embodied in a 1984 essay by the Czech writer Milan Kundera. In it Kundera sought to remind people that the cultural roots of this region are closer to Vienna than Moscow — not something the rest of the world assumed after 40 years of Soviet domination. This is Central, not Eastern, Europe was his point.

Of the people in this region Kundera wrote: “For them, the word ‘Europe’ does not represent a phenomenon of geography but a spiritual notion synonymous with the word ‘West’”.

The ambiguity of Kundera’s Central Europe does not make it any less important than the concrete political project called the Visegrad Group, but it is harder to define. At the same time the simple definition of the V4 — something like a lobbying group that generally agrees on what they are against rather than what they are for — remains its fundamental weakness. Such political hollowness has been on display in recent days as V4 leaders strenuously opposed Sprite that is flavored with fructose syrup instead of the sugar used in Germany or Austria.

Perhaps it is the mainstream that has changed, or perhaps the original idea of the project was flawed, but it is still worth noting how far the V4 project has veered from it original purpose, never mind the positive, if idealized, concept of Central Europe. The V4 was meant to help integrate four countries into the European mainstream that but for a mistake of history, they would otherwise have already been a part. Instead it is a vehicle for defining the region as something not only outside, but opposed to, the mainstream.

Kundera began his essay with a story about the last telegraph message sent by the chief of the Hungarian News Agency in November 1956 — before the building was destroyed by Soviet artillery. In it he wrote, “We are going to die for Hungary and for Europe”. Meanwhile, today’s V4 seeks to defend people’s right to die from too much pollution and sugary soda.