Film festivals are meant to celebrate films for curious and eager souls who cannot wait to see films before they go to through common distribution and are screened everywhere or televised. Some of them, however, are only presented at festivals. 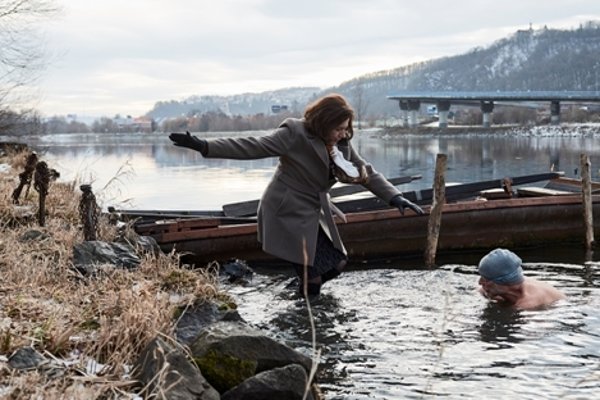 The Slovak edition (beside the Czech one) of the International Festival of Club Films Febiofest offers, moreover, the chance for non-native speakers to watch selected movies, mostly art films, documentaries and short or student films, with English subtitles.

A good film sometimes makes audiences delve into deep thoughts and soak it in gradually, rather than disturbing the prospect of discussing it immediately, Czech filmmaker Miroslav Janek (who also spent some years working in the USA) suggested after the screening of his recent movie, Normal Autistic Film on March 3.

However, he was wrong: his movie, which won the Best Czech Documentary 2016 Award, inspired the viewers to ask about the lives of the characters – real young autists who are as individual, funny, and as fighting with their childhood/adolescent years as any non-autists. 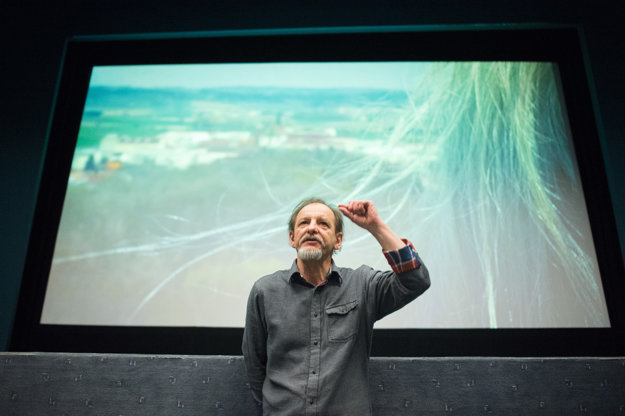 The original inspiration was also asked about and Janek – who also gave a masterclass at the Film Faculty earlier in the day – answered that the editor of the film, a student of Janek, organised a series of talk shows with autists and asked the Czech movie-maker to make video recordings of them. Later, the project developed into a full-fledged documentary that received also the Czech Lion Prize of the Czech Film and TV Academy.

Apart from masterclasses by Czech filmmakers and French filmmaker/film distributor Laurent Danielou, some movie makers also attended the screenings of their works, especially if it was a Slovak (or even world) premiere.

This was the case with the opening movie, Ice Mother, a Czech-Slovak co-production of (Czech) director Bohdan Sláma, in which the main character was played by Slovak actress Zuzana Kronerová.

Sometimes acting requires sacrifices and Kronerová, who plays a retired widow living the lives of her two adult sons and their families and forgetting her own ambitions, pleasures and emotions, learned to swim regularly in ice-cold water – and this was the director’s condition.

“There were many good actresses at the casting but I was chosen because I was the only one willing to dive into the cold water,” she joked at the screening. She added that after a hard start, she now keeps going to swim once a week, be it winter or summer, together with her husband. Kronerová also added she felt sorry that she had not discovered the beauty of ice swimming earlier in her life. The actress stressed a less-prominent motif in the “dramedy” movie, besides that of abusing elders, but that of a more general crisis of family.

In addition there was also a Slovak co-producer, Marko Škop, and Slovak cold-water swimmers, called Ice Bears, also featured in the movie that now heads for the International Narrative Competition of the Tribeca festival, founded by Robert de Niro, in New York, to be screened between April 19 and 30.

The concluding film of the festival, Spoor (POkot, in Polish), was also attended by filmmakers, most prominently by famous Polish director Agnieszka Holland who spent some years working and living in exile. The movie (a Polish-German-Czech-Swedish-Slovak co-production) based on the novelette Drive Your Plough over the Bones of the Dead by Polish writer Olga Tokarczuk is “hard to promote, as it defies any clear classification by genre”, Holland noted, adding that it is “a moral thriller combining mystery and philosophy”, but more accurately “an anarchist-feminist-environmental thriller with black comedy and fairy-tale elements”, she explained. The director, who also held a lecture at the Film Faculty and visited the Polish Institute in Bratislava, could only attend two of the four simultaneous screenings of her film in the Lumiére cinema in the capital on March 8. 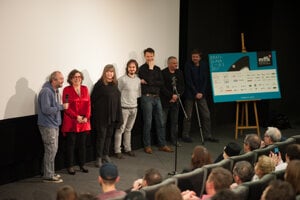 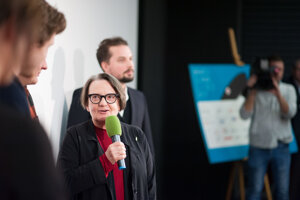 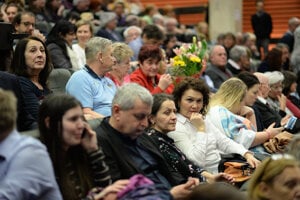 Thus, some of the audience were not able to hear her comments on the making of the film, as well as her praise on the Slovak part of the co-production, the music (by Bratislava Symphonic Orchestra) and the animals, which were allegedly nicer than usual.

The film which – as every movie worth the name thriller ought – hides a surprise until almost the very last moment also scored high at the Berlinale film festival earlier this year.

This year documentaries were also much appraised, much attended and also duly presented by some of the film-makers.

The Hotel Sunrise documentary, about life in the small town of Čierna nad Tisou in Eastern Slovakia where jobs are scarce but poverty plentiful, was originally a graduation film of director Mária Rumanová. However, the theme itself proved to be demanding in time, as the characters had to be observed and trust built so they could act as naturally as possible; five years thus went by before the film could be screened.

With the Slovak premiere at Febiofest, the film now will be screened also in some film clubs, and in the Lumiére cinema in Bratislava with English subtitles. The world premiere took place at the International Documentary Film Festival in Amsterdam (IDFA) as the first Slovak work shown there, in November 2016. 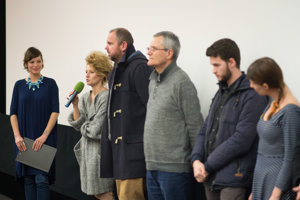 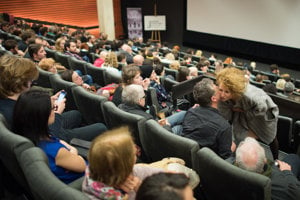 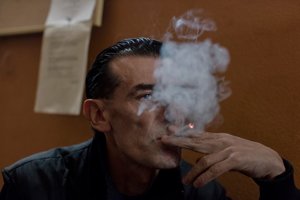 The Czech documentary FC Roma (Best Czech Documentary 2016, Students’ Jury Awards at the Jihlava Documentaries’ Festival 2016) by directors Tomáš Bojar and Rozálie Kohoutová tells a tragic-comic story of the football club from the Northern Czech city of Děčín composed solely of Roma players who almost always win the lowest national league without ever playing, as other clubs refuse to play against them and prefer to let them win by default. 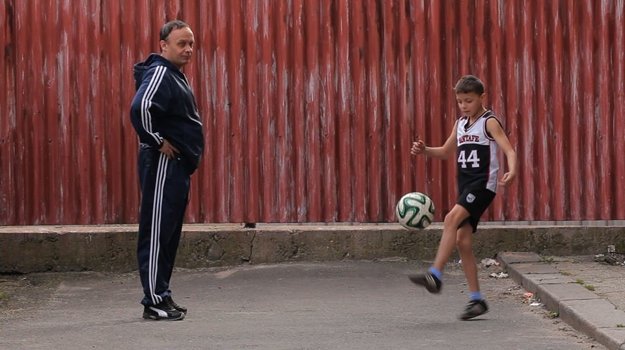 The film shows not just the depths of Czech racism but also the disputes and problems within the team itself and in recruiting players (including young age categories) and making them train, communicate with others, stick to discipline and appear at matches.

Febiofest has a competition, In the Middle of Europe, in which 20 movies from the Visegrad Group countries (Slovakia, Hungary, Poland and the Czech Republic), and Austria strive for a prize connected with €3,000 financial reward. The movies can be feature, animated and experimental.

The winning movie by Slovak director Barbora Sliepková – a documentary essay on a teenage girl and her in/voluntary isolation – About My Sister also won the Viewers’ Award. Two Polish movies, Three Conversations on Life as well as Lockjaw received special mention. 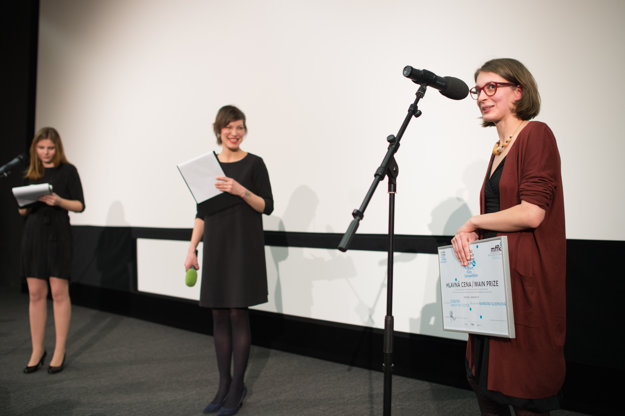 The Romanian director with international impact, Radu Jude, presented his recent work, Scarred Hearts, and received the Annual Prize of the Association of Slovak Film Clubs, a symbolic film reel. It also won an award at the Locarno Festival. 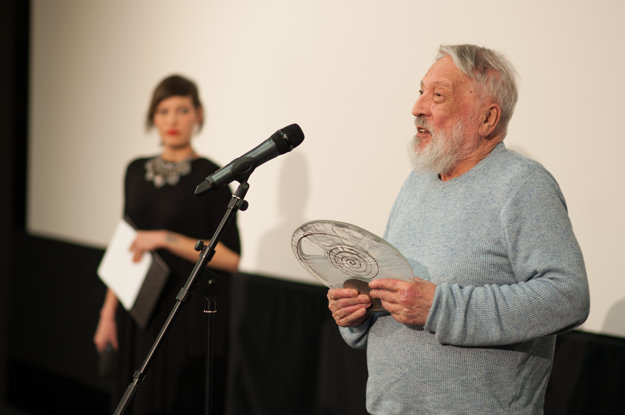 After the screenings which occurred between March 2 and 8 in Bratislava, some selected films of the Febiofest are now being screened until April 4 in ten Slovak cities and towns.