The elections would be won by Smer, though with only 27 percent of the vote.

Eight political parties would make it to parliament if the general election took place in mid-March.

It would be won by Smer, supported by 27.5 percent of the vote. This would represent 44 seats in parliament, according to the poll carried out by Polis for the SITA newswire between March 11 and 17 on 1,209 respondents.

Second would be the Freedom and Solidarity (SaS) with 14.5 percent of the vote and 23 parliamentary seats. The Ordinary People and Independent Personalities (OĽaNO-NOVA) and the far-right People’s Party – Our Slovakia (ĽSNS) would both come third, supported by 12.2 percent of respondents. This would represent 19 parliamentary seats for each. 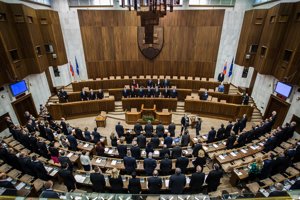 The Slovak National Party (SNS) would be supported by 10.3 percent of respondents (16 seats in parliament), followed by We Are Family and Boris Kollár with 7 percent (11 parliamentary seats), the Christian Democratic Movement (KDH) with 5.5 percent and Most-Híd with 5.4 percent (nine seats each).

The preferences were counted based on a 61-percent turnout. As many as 16 percent of respondents would not vote, while 23 percent were undecided, SITA reported.