The two film-makers who focused on a less-known saviour of World War II, the recently deceased Nicholas Winton and made films about him, received the award commemorating another war-time hero, Swede Raoul Wallenberg. 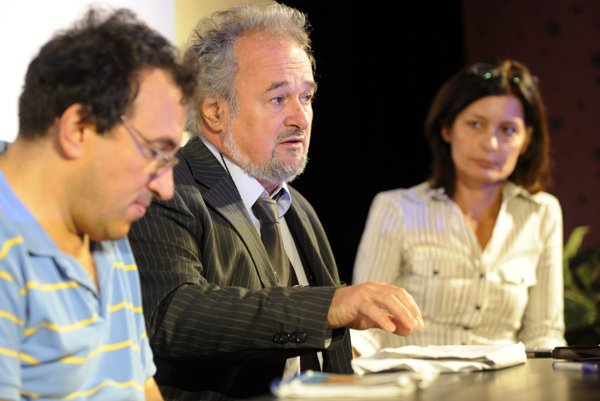 Editor and producer Patrik Pašš and director Matej Mináč received the Raoul Wallenberg Medal on March 14 at the Swedish Embasy in Prague, from the hands of Jill Parry Blonsky of the International Raoul Wallenberg Foundation, and Swedish Ambassador to the Czech Republic, Viktoria Li. The two were given the award because of their work on projects connected with Sir Nicholas Winton who saved hundreds of prevailinglyJewish children from Czechoslovakia shortly before the start of WWII, the SITA newswire wrote.

„Winton's story spreads the virus of good all over the world,“ Matej Mináč said. „This award is not just for me and Patrik Pašš; but for all those who helped us capture the message of Nicholas Winton on film. Our great thanks goes to them.“

„I receive the award with agreat deal of humility and thankfullenss,“ Patrik Pašš added. „It belongs to all the people who are inspired by the idea of humaneness and decency in their own activities.“

The Prague event was also attended by all the surviving „Winton's children“ from the Czech Republic. At the same place, Pašš and Mináč organised a meeting in 1998 with Winton and the people whom he saved and who grew up in the meantime. Inspired by the activities of the Englishman who lived in Czechoslovakia before the WWII, the two film-makers studied the historical events which he himself rarely spoke about, found him and the children he saved, and ultimately brought the survivors together with their unwitting saviour in a surprising event. The moving moment was captured by them on screen: three acclaimed movies ensued, All My Loved Ones (Všichni Moji Blízcí) in 1999, The Power of Good: Nicholas Winton (Nicholas G. Winton – Sila ľudskosti) in 2002, and Nicky's Family (Nickyho rodina) in 2011.

The medal is rewarded to honour the Swedish diplomat and humanitarian worker Raoul Wallenberg who during World War II saved dozens of thousands of Jews from Hungary.