Here is the overview of the hoaxes and fake news that appeared on the internet over the past week. 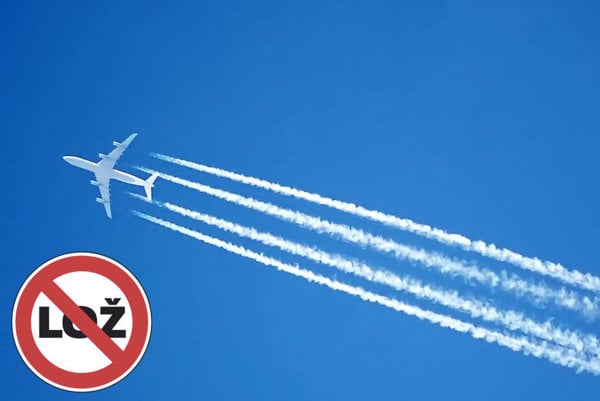 White condensation trails behind airplanes high in the sky are really chemicals that someone is spraying down on us. This is a particularly popular hoax known as chemtrails, and is often cited by the “alternative” media. Also the head of the Slovak Association of Doctors - Specialists (SLUS) Andrej Janco was keen to spread it.

On March 11, Janco shared on Facebook an article with an alleged picture of “the inside of chemtrails planes”, which was shared by 64 people.

The picture, that depicts the inside of a plane full of tanks connected with tubes, in reality comes from the Wired website and its report from a Boeing test plane. Test planes often have tanks filled with water instead of passenger seats, so that they can pump the water from the front to the middle and to the back part of the plane, which enables the pilots to test the plane with different weight options.

Conspirators like to use these pictures as “proof” that planes spray chemicals.

Condensation trails remain in places where airplanes have passed at altitudes where the air temperature is below -36 degrees Celsius. The gases that the engines emit contain a high amount of steam that immediately condensates in the cold air. The white trails are in fact microcrystals of ice.

The chemtrails conspiracy theory has been around since the 1990s and it claims that the planes are part of a secret programme. Yet it is not clear who runs that programme - sometimes it is alleged to be the US government, sometimes a secret power ruling the world. Other superpowers, like Russia and China, are not alleged to participate in the conspiracy. The purpose of the trails is also not made clear by the conspiracy theorists. Sometimes they claim it is for the global influence of the weather, or an attempt to chemically influence the population.

They often do not answer the simple question of how the people who control the chemtrails protect themselves from the effects of the chemicals in the atmosphere.

The “alternative” website Aeronet.cz recently reported that the Czech public-service television ČT recommends people to convert to Islam because of its alleged health benefits.

The original link to a scientific study is complemented with such an amount of xenophobic mashup that the original sense of the ČT news piece got lost in it.

ČT in fact made no such recommendation. They merely ran a report that the movements Muslims perform while praying help backaches, citing a scientific study.

The website of ČT writes about the findings of a professor from Jordan who claims that the moves Muslims make during their traditional prayers are good for the spine and even help weight loss.

That is not a great surprise in itself, since the prayers really do resemble regular exercise and when performed five times a day, it is set to bring about results. The author even admits that the Jewish and Christian prayers are composed of similar moves and should thus bring similar results. But he did not investigate those.

The conspirators were quick to see the report as an attempt to Islamise the Czech society. They refer to the so-called salami method, that creates the impression that the media have one headquarters with its own intentions, which coordinates all the activities of news desks. They claim it was not the editors of the ČT to select that piece of news, but the “headquarters of mainstream media” that is trying to disintegrate the European society.

Aeronet also accompanies its report with racist stereotypes, saying that Muslims avoid working in industry, just like Jews. “They mostly go into trade, and not dirty work in industry,” the website wrote. It fails to mention that Muslims and mainly recent migrants generally belong to the poorest parts of the German society and therefore mostly work as menial workers.

Jungle pictures from Prague are a hoax

Hundreds of foreigners going to an asylum and immigration centre in Prague scare the locals, the Czech “alternative” website Parlamentni Listy wrote recently. The information it reports originally appeared in the tabloid daily Blesk.

Parlamentni Listy went even further in being “tabloid” about the news. They did not interfere with the content of the story that talks about foreigners hanging around the Prague neighbourhood, but they did what they could to make it scary for the reader. Such as using the headline: “Groups of smoking foreigners! Immigration centre in Prague allegedly scares the locals. And there is a primary school nearby.”, which is supposed to suggest the children are in danger.

As they failed to come up with their own accompanying picture, they used one from the camp in Calais, France, where thousands of refugees camped until recently and was nicknamed the Jungle.

They also admit in the caption that the picture is from Calais, but readers who are only scanning the list of articles with pictures and headlines get the impression that Prague is changing radically. Which is not the case.