Košice will be linked to Tel Aviv

The flights will be operated twice a week.

The Hungarian low-cost airline, Wizz Air, will launch a new regular route from Košice to Tel Aviv in Israel as of June 23. It is already the fourth destination offered by the biggest airline in central and eastern Europe from the biggest eastern Slovak city, the Trend weekly reported on its website.

The flights will take place every Monday and Friday, while the price of the plane tickets including all fees starts at €34.99. In the winter season starting in late October, the flight days will be changed to Wednesdays and Saturdays. 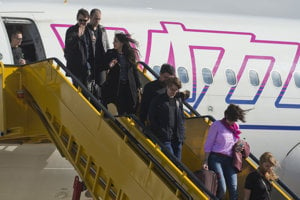 Košice airport already offered flights to Tel Aviv back in the 1990s, operated by the now-defunct Air Slovakia. It was used mostly by Slovak pilgrims to the Holy Land, and also Israeli patients travelling to Bardejovské Kúpele spa, as well as Israelis coming from eastern Slovakia and southern and south-eastern Poland, Trend reported.

There is quite an interest in flights between Slovakia and Israel. Czech airline, SmartWings, operates the flights to the country from Bratislava between April and October, while Israeli company, Sun D’Or, offers charter flights from Poprad between June and October once a week.

Moreover, during the winter season, there will be flights from Bratislava to Eilat/Ovda in southern Israel twice a week, Trend wrote.