Slovak public-service TASR newswire after one month withdrew from the agreement with pro-Putin newswire Sputnik, after it has drawn media attention and criticism. 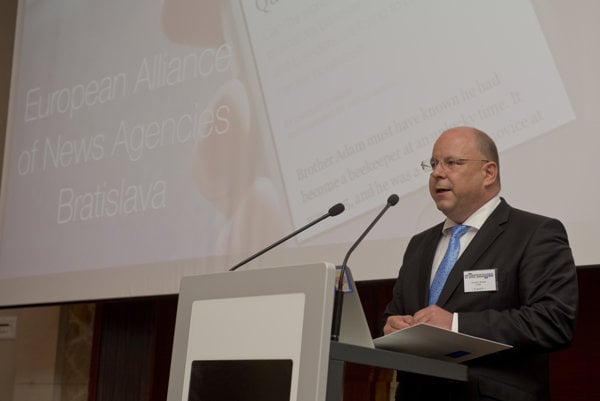 Sputnik is linked directly to the Kremlin, when sharing its content, the Omediach.com website reported on March 29. Based on the agreement, the newswires were meant to exchange content and language but also develop projects whose aim is to strengthen the relations between Russia and Slovakia, Sputnik wrote.

Head of TASR Jaroslav Reznik explained that TASR would be careful not to spread hoaxes. They allegedly had launched cooperation to have a direct access to the database and better evaluate whether a report is a hoax, or not. He also pointed to the fact that TASR has signed an agreement with the Russian TASS newswire.

Sputnik is a project that spreads pro-Russian propaganda around the world and boasts about fighting against pro-Western propaganda, through anti-press websites, in Slovakia for example the Hlavnespravy.sk website.

Sputnik was called “pro-Kremlin propagandist machinery” by NATO, which it alleges spread distorted stories and disinformation impacting on political opinions around the world. Such a newscast is used “for political and military needs”, NATO stated, while Sputnik protested against such a definition.

The public newswire TASR has been established and funded by the state, the Omediach website wrote, adding that it is the basic source of information for many media outlets.

Sputnik expressed satisfaction about the cooperation with TASR, while the head of the Slovak newswire, Jaroslav Rezník, said: “I would like to stress in the first place that TASR cares very much about avoiding hoaxes in its production. We launched cooperation with another newswire to have a direct and not second-hand access to its database, which gives us a better space for evaluating immediately what is a potential hoax, what not – and to point to this difference,” he summed up, adding that when TASR foreign editors choose a news piece for the service, its original source is duly noted, and it will depend on the editor of the final media source whether to use it, or not.

Moreover, a reciprocal principle has been agreed – which means that Slovak news from the newswire has another communication channel; and it will also be possible to check on their over-interpretation.

Chief editor of the Slovak newswire, Marián Kolár, said that the exchange of content mostly comes in English but TASR has always been interested in enhancing the scope of action of its news sources, he added.

However, TASR already has a contract with the TASS official Russian-state newswire, Rezník added, as cited by omediach.com, stressing that the contract with Sputnik enables them to double-check any potential shift in the meaning of some news stories.

In the past 24 hours, the TASR leadership has repeatedly made an in-depth scrutiny of the content of the contracts between TASR and Sputnik, and have come to the conclusion that during the one month of the contract’s validity, not a single piece of information has been taken from the Russian newswire, TASR itself wrote on March 30 at noon, announcing it has scrapped the contract.

But gender protocol that helped in new ranking recently suspended.