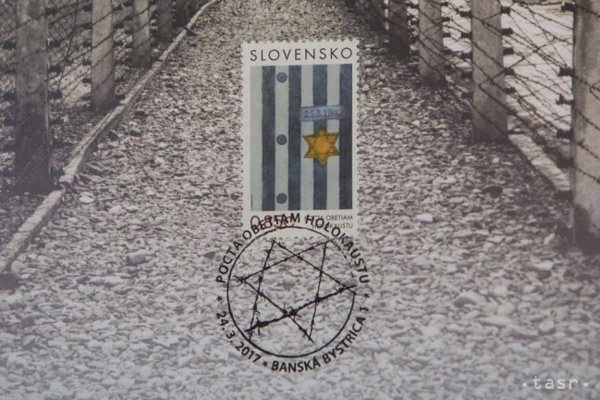 The Slovak post office is commemorating the memory of holocaust victims; with the 75th anniversary of first deportation of Jews to concentration camps, a new postal stamp named Honour was released to hounour holocaust victims. An exhibition at the Postal museum in Banská Bystrica is opening with the same name.

“The exhibition refers to the first deportation of Jews which began on March 25, 1942. The patron of the exhibition is ambassador of the Israeli state in Slovakia, Zvi Aviner Vapni,” said Martina Macková, spokesperson of the Slovak Post Office, for the TASR newswire. Graphic arts students in the third high-school grade also presented perspectives of holocaust topic with sketches and graphics.

Through their art, young people showed that they are not indifferent to the terrible incidents of the recent past, thinks Róbert Gálik, CEO of the Post Office.

“I believe that the message of the exhibition and its forceful portrayal of the topic will become reminders not to forget about the tragic consequences of racial and ethnic hatred,” Gálik stressed, as reported by TASR newswire. Typography was added to chosen graphics as the base for making philatelist products.

The post office stamp Honour to holocaust victims has a monetary value of 0.85 euros, printed by Poštovní tiskárna cenin Prague with offset technique. Its motive is a detail of striped clothing with a yellow star and label with the date March 25, 1942, the day of the first transport of Jewish women from Slovakia. The author of the design is student Karin Uváčková.

Alongside the stamp, the post office released an envelope and stamp FDC (first-day covers) with the date 24.3.2017 and domicile of the town Poprad. The motive of the FDC envelope is a suitcase with a yellow Jewish star from the museum of Auschwitz-Birkenau; the motive of the FDC stamp is barbed wire. The author of the engraving is academic painter Rudolf Cigánik.

The exhibition will be open at the Postal Museum, Banská Bystrica until November 16.