Hungarian Wizz Air will launch the route on June 25. 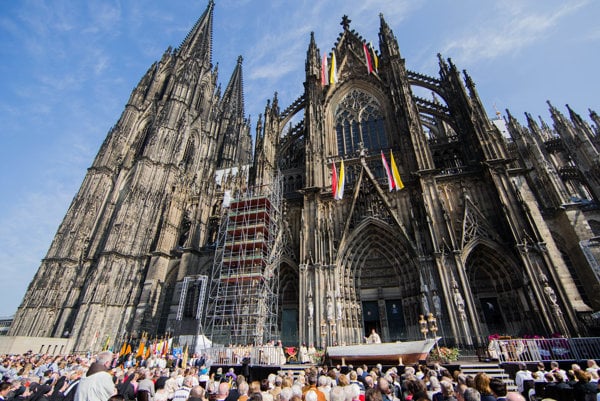 From June 25 it would be much easier for Košičans to visit the cathedral in German Cologne. (Source: AP/TASR)
Font size:A-|A+

The Hungarian low-cost airline, Wizz Air, announced on April 3 a new route from Košice to Cologne in Germany. The new service will commence on 25 June, with two weekly schedules, on Thursdays and Sundays during the summer season and on Mondays and Fridays, during the winter season.

”Only a week after announcing the route from Košice to Tel Aviv, today we are happy to bring more positive news for our customers,” said Sorina Ratz, communications Manager at Wizz Air as cited in a press release by the airport. “We expect this new service to further stimulate bi-directional tourism and strengthen trade and business connections between the countries.”

Passengers planning their holiday or a weekend getaway to this destination can already book their tickets on the carrier's website with prices starting from €19.99.

“The opening of the Cologne route is a real milestone not only for the airport but also for the city and the whole of eastern Slovakia,” said Michael Tmej, CEO of Košice International Airport. “This route will provide a vital link for both leisure and business travellers.”

Richard Raši, the Mayor of Košice, recalled that there are more than 60 German companies in Košice and its surroundings.

“I am convinced that the new route will make a significant contribution to the development of tourism, foreign investments and trade,” said Raši.

Renáta Lenártová, Košice vice-mayor and chairman of the board of Košice Tourism sees the direct air link with Germany as another proof that international interest in Košice is increasing.

Zdenko Trebuľa, the head of the Košice self-governing region pointed out that eastern Slovakia will have a direct air connection with Germany for the first time in history.

Eastern Slovakia certainly has a lot to offer to both German tourists and investors.

“More than 150,000 tourists from Germany visit Slovakia every year,” said Ondrej Bernát, chairman of the board of Košice Region Tourism. “I believe that thanks to the new route this number will increase and that many German tourists will explore the beauties of our wonderful area.”

Wizz Air started its operations in Slovakia from Košice in 2013 and since then has continuously invested in its ever-growing network, now offering five routes to three countries. In 2015, Košice airport became the 20th Wizz base with one new Airbus A320 aircraft and 42 local crew employees. Wizz Air started operations from Poprad and Bratislava airport in 2014 and 2016, respectively, further expanding its low-fare network from Slovakia.