It’s not easy being an ‘alien’ in Slovakia

Are Slovaks scared of foreigners? The stories of those who are trying to make their homes here suggest that ignorance and bureaucratic inertia, rather than fear, cause more problems. But the situation might be improving. 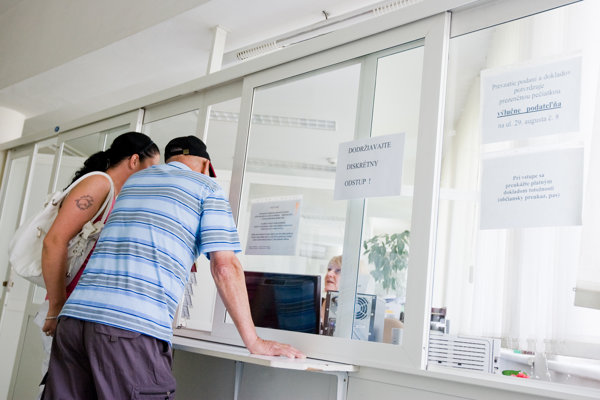 Dealing with state offices may be difficult and time-demanding. (Source: SME)
Font size:A-|A+

The migration crisis, which has resulted in many countries adopting measures to deal with a huge influx of refugees to Europe, and which also influenced last year’s election campaign in Slovakia, has had an impact on Slovaks’ attitude towards foreigners.

The fact is, however, that the country’s approach to new arrivals has always been rather unwelcoming, something that is reflected in its strict legislation, experts from the non-governmental sector who deal with foreigners agree.

“Slovaks have always perceived foreigners as being different,” Azim Farhadi from Afghanistan, who has been living in Slovakia for more than 18 years and now helps foreigners integrate into Slovak society, told The Slovak Spectator.

He describes the case of a foreigner who has lived in Slovakia for 30 years and works as a doctor but faced serious problems when he wanted to buy a car. The main issue, from an official point of view, was that he was not Slovak.

More hopefully, Emília Trepáčová, a social worker at ADRA Slovakia, which helps people that have been granted asylum or additional protection, thinks the situation is gradually improving as the initial influx of news and comments about the migration crisis, from both politicians and the media, fades.

“The fact that neither the media nor politicians hold forth on this topic much has been reflected in our experience,” added Trepáčová, winner of the White Crow 2016 award. She received the honour together with Khadra Abdile, a Somali refugee who was repeatedly attacked because of her faith and skin colour.

People from the non-governmental sector engaged in helping foreigners approached by The Slovak Spectator agree that among the biggest barriers currently facing foreigners is that of language.

“Office workers and doctors in most cases do not speak a foreign language, which would certainly simplify the first contact,” Jana Verdura, coordinator of voluntary returns at the Slovak Catholic Charity, told The Slovak Spectator.

Some foreigners The Slovak Spectator spoke to in the past confirmed it is also a problem when visiting a doctor. Though there are some who speak English, when they visit state-run hospitals and medical facilities, they often need to take a Slovak-speaker with them. This is not the case at most private facilities, they admitted.

Moreover, most refugees do not speak Slovak and in some cases not even English. Trepáčová says that her organisation always tries to secure a translator or cultural mediator in cases where individuals speak a less common language.

“It is then up to our clients how they will approach learning Slovak,” she added.

Farhadi says that sometimes people who arrive in the country have no opportunity to start learning Slovak. The situation is different when they find a job with many Slovak colleagues, and are forced to learn and speak the language. If they work with other foreigners, they are not forced to learn it.

After Slovakia joined the EU in 2004 and the Schengen zone in 2007, the number of foreigners living and working in the country increased, according to the International Organisation for Migration (IOM) branch in Slovakia.

In 2015, there were almost 90,000 foreigners with residence permits in Slovakia, IOM data shows. Foreigners therefore made up 1.56 percent of the total population.

Meanwhile, the Central Office of Labour, Social Affairs and Family (ÚPSVaR) reported that there were 35,100 foreigners working in Slovakia at the end of 2016. Compared with the end of 2015, this represents is a significant increase: a jump of 9,600 people.

“Slovakia gives many possibilities to EU citizens, but for foreigners from other countries it is very complicated to jump over all the bureaucratic procedures,” Oleh Larchyk from Ukraine told The Slovak Spectator in an earlier interview. It took him more than six months to get the paperwork completed, he added.

Steven Gouws from South Africa also mentioned the red tape that he faced when applying for a work visa as being among the main obstacles when relocating to Slovakia. He has lived here for more than six years, and currently works as an English language teacher, mainly for business people.

Moreover, people with what is known as “additional protection”, as opposed to full refugee status, face more problems, as they are granted only a temporary residence permit. As a result, they face limitations when seeking a doctor, placing children in kindergartens or asking for social benefits if they need these for any reason, Verdura explained.

As for doctors and dentists, people with additional protection do not receive normal cards proving they are registered with a health insurer: they only have cards issued by the Migration Office that cover the costs of health treatment, she added.

“Doctors refuse to accept these cards, since they either lack information about them being used for confirmation of health insurance, or have the information but are not motivated enough to accept them because it is administratively difficult to report this kind of treatment,” Verdura told The Slovak Spectator.

Farhadi also points to problems that foreigners without permanent residence permits face when dealing with the foreigners’ police. While health and social insurance is secured by their employer, they need to deal with residence on their own and this is quite demanding, he added.

Since there are still many loopholes in the legislation concerning the integration of refugees in Slovakia, it is necessary for social workers to identify helpful officials or doctors who do not just point to problems but instead seek solutions, Verdura says.

“We cooperate only with those willing to help,” she said, adding that the situation has improved over the past few months and that people are more open to such collaboration.

There are several examples of a positive approach by employees working for the public administration. For example, Verdura recalled a case of one office worker who did her best to help a family place their child in a kindergarten, although they had only temporary residence permits and the whole process was very complicated.

Also, Farhadi mentioned one employee at a Bratislava-based labour office who personally called him on behalf of a foreigner who had recently lost his job, in order to help him find a new one.

Trepáčová also praised the cooperation with the Migration Office, saying its employees are friendlier and more willing to help than in the past.

“There are many who really want to help, but often they cannot influence the deep-rooted bureaucratic procedures,” Verdura added.

This is especially true for foreigners who have arrived in Slovakia in the past five to ten years, according to Farhadi, who points to some problematic rules set by the current legislation.

For example, applicants who have been refused asylum and instead granted another type of protection face demanding processes when dealing with the authorities. Though they live and work in the country and pay taxes, they need to visit the Migration Office every year and then wait one month for them to decide on their case. Then they have to go to the Foreigners’ Police to register their residency. This takes them four-five days a year, for which they often have to take vacations from work, Farhadi explained.

He also points to another change that is visible especially outside Bratislava: an attitude towards foreigners among both ordinary people and the authorities that has been negatively impacted by the migration crisis, particularly when people do not know foreigners.

“I talked to school children in more than 15 towns across Slovakia between December and February and they asked me questions I had not heard before,” Farhadi said, explaining that they mostly repeated negative news spread by the media.

When he asked them about terrorist groups or the situation in the countries from which people often flee, the children new nothing about this.

For Verdura, talking about migration and showing positive examples of integrated refugees who consider Slovakia their second home may improve the current situation.

“It is necessary to continuously work on changing public opinion, refuting prejudices, talking honestly and openly, and calling facts by their real names, but at the same time finding some kind of balance,” Verdura said.

Trepáčová illustrated the need for dialogue in the case of a Ukrainian refugee with four children and their neighbour. When they met for the first time, the man had a rather hostile approach to all refugees. However, they talked a little, explaining their attitudes to each other. A few days later, when the woman needed to visit the doctor and nobody from the organisation was able to help, the man offered his assistance.

“Of course, these cases are individual,” Trepáčová admits, adding that it often helps when people, including officials and doctors, see that foreigners are ordinary people with ordinary problems.