This is not a game, and these are not children

If politicians care about the future of the country, they need to offer young protesters with specific demands more than the just same old vague assurances. 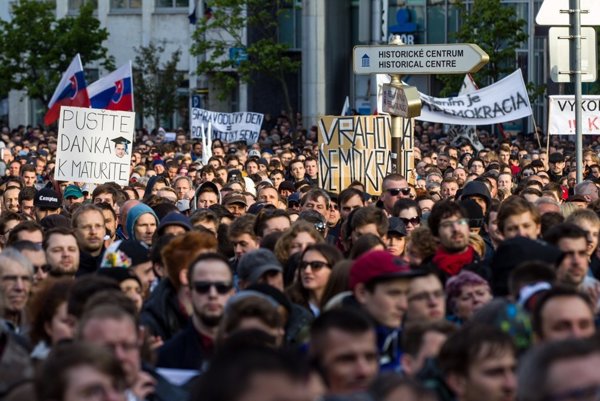 Thousands of people flooded Bratislava’s SNP Square and adjacent streets the day after Easter Monday to support a protest march organised by students through Facebook. Police estimates that 5,000 had turned out were later updated to 10,000 protesters, a very high number by Slovak “protesting” standards.

This is not the first anti-corruption protest that Slovakia has seen since the current government emerged. Last summer was marked with regular protests in front of the Bonaparte development, the home of Prime Minister Robert Fico. It was built by Ladislav Bašternák, a businessman with ties to Smer who is facing allegations of VAT fraud.

But this was the first protest that has come and gone without leaving the rancid odour of party politics. And that is one of the main reasons that it gained momentum and why various groups and strata in society are calling for it to continue.

A student-organised protest is something that will strike a chord for many Slovaks. Indeed, the pictures of young people leading protests recalled memories among many middle-aged Slovaks who were students during the 1989 Velvet Revolution, or from 1998, when students protested against the rule of Vladimír Mečiar and everything it stood for.

But the reactions of politicians to the protest suggest how much they underestimate young people and their idealism.

“Nobody should drag children into big politics, because they have always ended up paying for it,” SNS MP Anton Hrnko said in reaction to the protest for the Sme daily.

Smer MP Dušan Jarjabek admitted on the day of the protest that he had “studied these things on the internet this morning” – but apparently refused to accept what he saw, dismissing opposition politicians’ statements distancing themselves from the event as insincere.

Regardless of the conspiracy theories (“there were only hundreds of people, paid €20 or €30 each, possibly from the money of George Soros”) or the insinuations of ruling party politicians, it is safe to say that the gathering maintained its non-political character. This sets it apart from Bonaparte protests last summer, or the Gorilla protests before the 2012 election.

Even Fico acknowledged this, in a statement of cautious approval: “It is good when young people take an interest in what happens in the country and they are ready to help it with concrete actions”.

He then addressed “all citizens” to assure them his government regards corruption as a serious problem, and went on to list changes to laws and public procurement rules, and cooperation with international organisations. Does the prime minister really believe this is the answer that students and their fellow protesters were seeking?

They had called for proper investigation of specific corruption allegations, and prosecution of those involved in committing corruption or covering it up. They are unlikely to accept the same old bland clichés recycled by politicians.

“The prime minister has taken some anti-corruption steps and I would be glad if it helped, but we simply do not believe him,” one of the two main organisers, Dávid Straka, told the Sme daily ahead of the protest.

The prime minister’s ambiguous response, which failed to acknowledge that he was named on many protest banners as a source of corruption, will do nothing to address this lack of faith.

Students like Straka say they do not want to have to leave this country in search of a better life. But the evidence suggests that is exactly what the best graduates are doing: as many as a quarter of them, according to a recent survey at Slovakia’s 18 universities.

This protest movement, started by teenagers, might not bring about change on the scale of 1989 or even 1998. But no politician who values the future of Slovakia should ignore it.