The far-right People's Party of Slovakia (ĽSNS) distributed three cheques worth €1,488 each to mark the anniversary of the wartime Slovak State 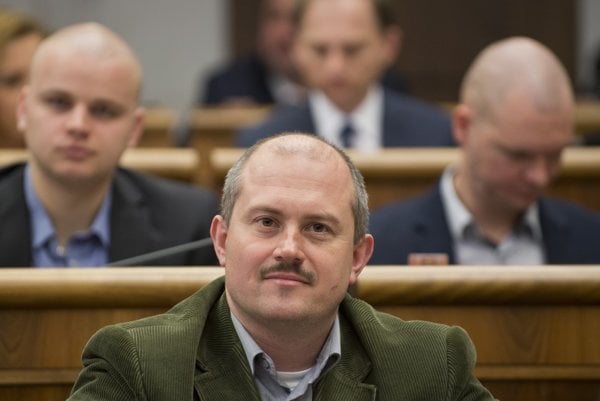 Police have confirmed on May 3, that the National Criminal Agency (NAKA) has opened a criminal prosecution concerning the three cheques that ĽSNS distributed to socially disadvantaged families on March 14, to mark the anniversary of the establishment of the wartime Slovak State.

Spokesman for the Police Corps Presidium, Martin Wäldl, confirmed the information, first published by the news website aktuality.sk. The party is suspected of allegiance to the well-known neo-Nazi symbol 1488. The number 14 represents the sentence "We must secure the existence of our people and the future of white children”, attributed to the American racist, David Lane. The sentence has 14 words and this figure is often used as a neo-Nazi symbol, together with 88, which refers to the Nazi greeting Heil Hitler – with H being the eighth letter of the alphabet, the SITA newswire wrote.

The prosecution have cited the misdemeanour of demonstrating sympathy for a movement aimed at suppressing fundamental rights and freedoms and the case was launched on March 21, Wäldl confirmed.

On the anniversary of the establishment of the wartime Slovak State, March 14, the ĽSNS celebrated with a gala-programme, the wartime anthem Hej, Slováci, and a charitable donation: chairman Marian Kotleba gave three cheques worth €1,488 each, to three families in need.