Slovak politicians welcome the election of Macron as French president

President Kiska: Your victory is a happy day for all who believe in a united and strong Europe. 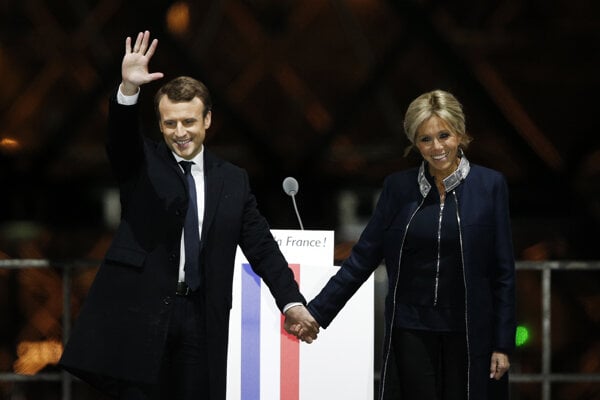 French President-elect Emmanuel Macron holds hands with his wife Brigitte during a victory celebration in Paris on May 7. (Source: AP/TASR)
Font size:A-|A+20

“Your victory is a happy day for all who believe in a united and strong Europe,” Kiska wrote in a telegram of congratulations to Macron, wishing him success in carrying out all tasks related to the office. “Cooperation in the European Union based on common values is irreplaceable for us, enabling us to overcome all challenges today and in the future.”

President Kiska is looking forward to cooperating with Marcon and deepening what he described as “traditionally excellent and intense” relations between Slovakia and France.

Fico’s statement, provided for the TASR newswire by his spokesperson, declares that the French people have elected their president in a free election and this decision needs to be respected.

Fico's statement also said, “I believe that this choice represents a piece of good news for the European Union’s future and it will allow the member states to look for ways to get closer to each other, instead of moving apart.”

The Prime Minister, who also sent a telegram of congratulations to Macron, stressed that Europe will need stability and constructive cooperation following Brexit, with France’s role in this situation being irreplaceable.

Meanwhile, Lajčák on Twitter wrote that he received the news of Marcon’s election with delight.

“We view this election as a recognition of the lasting attractiveness of values and principles that have been buttressing existing European cooperation and at the same time also as a display of the will to continue in building the common [European] project,” wrote the Slovak Foreign and European Affairs Ministry in an official statement, stressing that Slovakia considers France to be one of its most important foreign partners and allies within the EU and NATO.

Speaker of Parliament Andrej Danko (SNS) sees Macron as a new hope for uniting the EU. In his words France, by electing Macron as president, has showed Slovakia a way "to stop people in politics, who only criticise and offer only conflict and egotistic solutions", Zuzana Čižmáriková, the head of the communication department at parliament informed TASR.

The opposition Freedom and Solidarity (SaS) party congratulated Macron on his victory and wished him a lot of courage when introducing the reforms that France needs, the SITA newswire reported.