Ten MICE events in 2017 should bring almost €6.5 million to Bratislava. 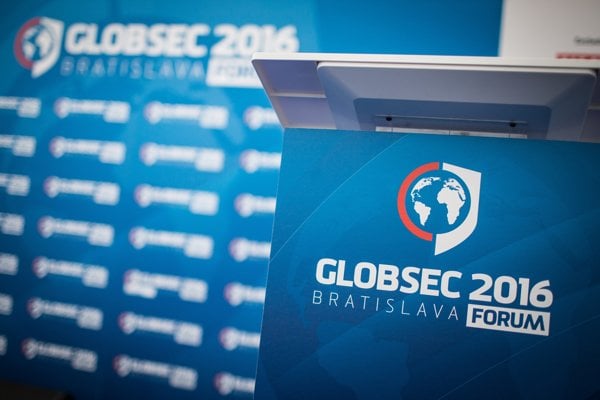 The GLOBSEC security forum is one of the regular MICE events in Slovakia since 2005. (Source: Sme)
Font size:A-|A+0

Critical situations at popular holiday destinations are driving a change to people’s leisure travelling maps, also bringing benefits for central European countries. In the case of pure business congress tourism, however, such radical changes do not emerge.

Congress, or convention, tourism is not just about travelling but focuses especially on the provision of facilities and services for business and public institution representatives under the Meetings, Incentives, Conferences and Events (MICE) idea. While Vienna, Prague or Budapest have gained millions of euros from participants of MICE congresses for years, Bratislava and other Slovak cities still do not know how to get into the first MICE organisation group.

“Yet, Bratislava remains a very unknown city for the people who buy and sell events,” Nina Erneker, MICE specialist at the convention department of the Bratislava Tourist Board (BTB), told The Slovak Spectator.

MICE tourism, with its pure business character, has an essential impact on the development of urban tourism. It is one of a few economic sectors that provide net benefits for hotels, venues and other entities, create skilled jobs, have a multiplier effect on the country’s reputation and raise the quality of life for city residents, said Erneker.

Compared to leisure tourism, each congress, conference and incentive event brings about €1,000-€1,500 per person to the destination without fundamental influence on its location. Each participant must pay for registration and accommodation fees, transfers, promotional materials, websites and catalogues.

“In contrast, an ordinary tourist who gets off of the ship, walks around the downtown and buys a souvenir, coffee and schnitzel, spends perhaps €50 in the city,” Erneker said.

Five-star events can attract, for example, optoelectronic experts “who discuss business issues worth tens of billions of euros and really do not want to stay in four-star hotels”, Erneker added.

While several European cities, like Prague and Barcelona, are already struggling with the problem that their number of congresses has crossed the sustainability line, Slovak cities would welcome more MICE events. The statistics of International Congress and Convention Association (ICCA) show that in 2015 Slovakia organised only 26 events.

In the same year, Austria organised 258 events (178 in Vienna), Poland 193 (62 in Warsaw), the Czech Republic 154 (123 in Prague) and Hungary 112 (95 in Budapest), said Ľudmila Novacká from the Department of Services and Tourism of the Economic University in Bratislava.

“Bratislava, with its 16 events, is at the level of regional destinations in those countries,” Novacká told The Slovak Spectator.

In contrast to 2015’s results, experts expect higher numbers stemming from 2016 when the Slovak Presidency of the EU Council took place. Several non-corporate meetings attracted many government authorities and also entire teams comprising their assistants and other employees.

“The pretty decent image that Bratislava confirmed during that period is also important,” Novacká said.

These events, however, probably increased the numbers only temporarily. The trend in the coming years depends on the Slovak propagation system, including the BTB, the Transport Ministry and regional activities, said Erneker.

In 2017, Bratislava will host events like the 12th GLOBSEC security forum, which has annually brought experts, politicians and diplomats to the city to talk about current global security challenges; REM winter 2017; By Design Conference; Polyglot Gathering; UMAP 2017; Eurotox 2017; Reactif Conf; 17th Czech-Slovak Psychiatric Convention; Central European Congress on Obesity (CECON), and CERN. All these events should bring almost €6.5 million to the city, according to BTB calculations.

Moreover, in 2018, the city will host the 50th anniversary of International Chemistry Olympiad (ICHO) together with Prague, and in 2019, the World Organization of Family Doctors (WONCA) Europe regional conference with about 3,000 delegates from all around the world.

However, each MICE event needs a few years of preparation activities in order to be successful. Organisations that plan to organise some event in 2018 must know its location already in 2015, said Erneker.

Slovakia, to date, organises too few events of the first category due to a lack of pursuance of high standard requirements.

Novacká pointed to MICE requirements such as a congress centre with sufficient capacity of congress halls, direct flight connections, and conceptual management with quick reactions and a professional approach.

While the largest congress centre in Slovakia, Incheba Expo Bratislava, is suitable for events at the highest level for up to 4,500 people, Bratislava has the chance to acquire mainly events with a capacity of up to 500 people, the Pravda daily wrote.

Several hotels in Bratislava with a hall for more than 300 people which fulfils MICE standards, are still fully booked, said Novacká.

Among Bratislava’s advantages are its proximity to Vienna and Budapest, easy and quick transport to the city centre and rapid development of the infrastructure and the economy, according to Andrea Baloghová, head of media and external communication at GLOBSEC. The influx of foreign companies and the startup establishment wave are factors that may make Bratislava a centre of congress tourism.

“Apart from the major metropolitan areas, Bratislava is more serene, and in today’s world full of terrorist attacks, provides visitors with a relative sense of safety,” Baloghová told The Slovak Spectator.

In addition, the Slovak capital is a kind of boundary between western and eastern Europe, can provide the best of both worlds and play a role of a neutral platform for meetings of representatives from across Europe, Baloghová said.

To succeed in the MICE competition, Slovakia must attract ‘five-star’ clientele. In order to do that, BTB has defined, via third parties, what the city stands for according to the target group and tries to establish proper communication. The basic pillars of communication are accessibility, innovation, excellence in execution and safety, said Erneker.

“On the website, we have a communication manual that serves the local community to speak the same language,” Erneker said.