The day commemorating the arrival of evangelists from Constaninople, the Saints Cyril and Methodius – July 5 – has been pronounced a state holiday. 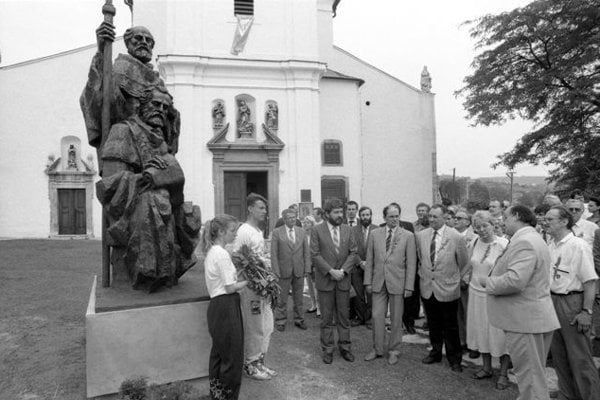 Historical findings show that Christianity came to the territory of today’s Slovakia even before their mission here, from the Roman Empire, but the first half of the 9th century was the era when it became more distinctive among the Slavs who had lived in this area since approximately the 6th century.

A bit of Great Moravian history

The emperors of Greater Moravia, which included today’s western Slovakia and Moravia, in particular Rastislav, perceived Christianity as the element to support this early-medieval state. Rastislav, wanting to avoid the influence of the Kingdom of the Franks, invited apostles from the Byzantine Emperor, Michael III, to his court (an action to which the pope did not react positively) and thus Constantine (who changed his name to Cyril) and Methodius, both born in the city of Thessaloniki, arrived in the region, the TASR newswire wrote. There was a big Slavonic minority around Thessaloniki, and they both spoke the language, which they chose to be the language of the liturgy. They also created a new script, Glagolitic, and translated the core of the available religious documents into the old Slavonic language.

They arrived in Greater Moravia in 863 AD and although they left after three years, they continued their work to codify Slavonic as another liturgical language alongside Latin. Cyril, (Constantine) died in 869 in Rome but Methodius returned to Greater Moravia as a teacher and was later pronounced Pannonian Archbishop. After his death in 885 AD, the Latin clergy gradually became the decisive power in the empire and the successors of Methodius were exiled mostly to the historical territories of Bulgaria.

Slovakia celebrates SS Cyril and Methodius with a state holiday, but some other countries, e.g. the Czech Republic, Russia, Bulgaria, the Ukraine, Belarus and the Balkan territories commemorate them, too, and also celebrate the script which they brought with them and which is used – in a slightly changed form – in some of these countries today.

A host of religious and cultural events around Slovakia mark this holiday.