After past similar events in other regions, now western Slovakia, mostly the Bratislava and Trnava regions, were hit by a storm and whirlwind amounting to a cyclone on the evening of August 10. 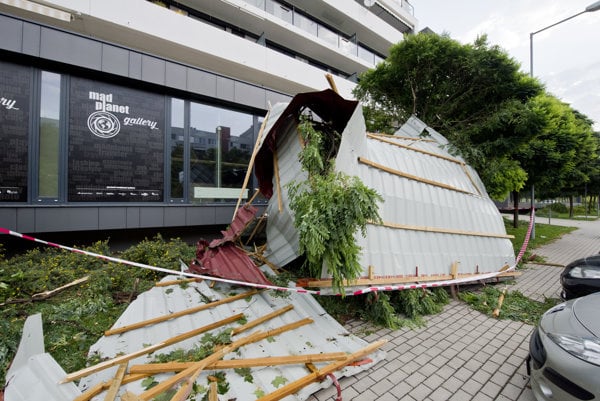 A roof from a building in Bratislava-Rača, during storm on August 10. (Source: TASR)
Font size:A-|A+

For example: the high winds reaching a speed of 100 kilometres per hour at Bratislava airport. They caused innumerable damage, including fires (e.g. in the Trnava brewery), fallen trees, broken electricity wires, transport chaos and even torn roofs.

Fire-fighters were sent to the affected areas and it took them a long time to clear up the damage caused by the sudden storms, Zuzana Farkasová of the Fire and Rescue Corps (HaZZ) presidium told TASR newswire. They mainly removed fallen trees from roads, cars and buildings as well as dealt with damaged roofs and electricity pylons. On August 11, they also helped bring certain roads back to normal after traffic halted due to the storms. The violent storms and wind required more than 100 callouts in the Bratislava region and in Trnava regions each, and dozens more in the Trenčín, Nitra and Žilina regions.

Several villages around Bratislava as well as its boroughs and the Záhorie area have reported power blackouts due to the storms.

A tree fell on the Lisztovo Square city traffic stop near the Main Station, causing the electricity wiring for trolley-buses to break. Other damage includes a roof torn off an apartment block (a mere two years old) in the town of Malacky, the Nový Čas daily wrote, adding that fortunately, no life was lost. Also, insulation was ripped off a house in the Trenčín region, and fallen trees and branches damaged several cars, blocked rails for trams in Bratislava and partially damaged roofs on family villas, the Slovak media stated.

Even the Volkswagen Slovakia plant located in the Devínska Nová Ves borough of Bratislava had to suspend its car production for a few hours on the night of August 11, due to blackout in the supply companies in Lozorno, the website etrend.sk wrote. 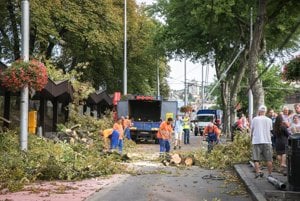 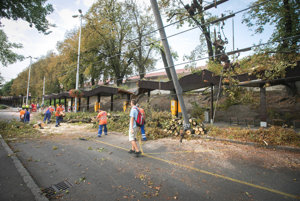 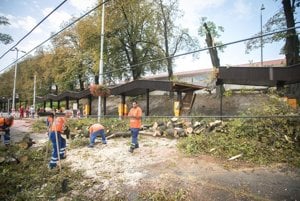 On August 12, the West Slovak Distribution Company (ZSD) electricity utility reported that around 6,000 customers were still without electricity as of noon, mainly in Bratislava and its vicinity, as further damage was also caused by storms affecting the same locations the night of August 11. On its Facebook profile West Slovak Energy (ZSE) profile reported that its staff was dealing mainly with damage on high voltage lines throughout Friday, as wires on many locations had been torn by fallen trees.

More windstorms to be expected

Meteorologists say that in some places, e.g. in Malý Javorník, the wind amounted to the force of a hurricane (with 130 km/H). Criticised for not having warned citizens, they explain that the storm was expected on that day, but not at this power and magnitude. Also, once its force was evident, they had to primarily warn police, fire-fighters and rescue service.

We should learn to live with such climatic phenomena, meteorologists warn, as cited by the Nový Čas daily, since these phenomena will occur more frequently.