Slovak cities may get smart, government will support them

While Bratislava, Nitra and Kežmarok have already introduced their smart city ideas, other cities seek to follow them. 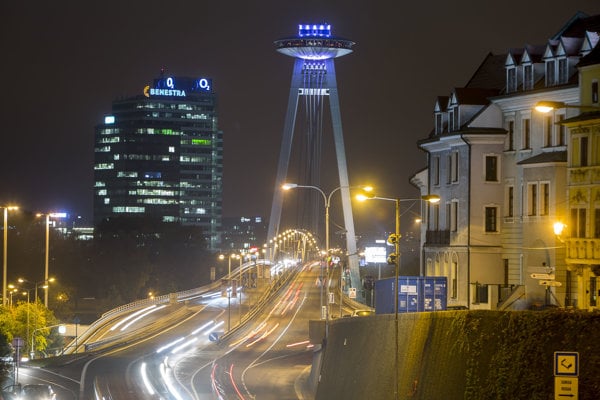 People living in the city wake up in the morning, open a window and inhale fresh air without smog, prepare breakfast with appliances using renewable energy, shower using a water saving system, and then go to work.

After leaving their dwellings, they sort their recycling and leftovers into containers to ensure clean surroundings. They get in autonomous electric vehicles in a parking lot with recharging stations, recognition of license plates and integrated apps.

On their way to work, they pass several pedestrian crossings with flashing LED lights, watch the weather and news on digital information boards, and check their emails on smartphones thanks to the citywide Wi-Fi network.

This is how several “smart city” technologies could operate.

For a better quality of life

The smart city concept is a new approach to the development of cities using modern information technologies and other innovations to improve the living conditions. It focuses on the environment, waste management, energy, and digitisation.

The smart city is mainly about a new look at city planning and quality of people’s lives, said Igor Wzoš, deputy mayor of Poprad.

“In the next era, cities will have to operate differently, traffic is dynamically increasing and demands on ecology and other development factors are rising,” Wzoš told The Slovak Spectator.

Capital city has an idea

The Bratislava city council has already prepared its own smart city idea. The concept is now ready for public comment, said Bratislava’s Deputy Mayor Ľudmila Farkašovská during the EurActiv Stakeholder Forum at the end of June.

Authorities who presented at the forum consider four main areas of the concept to be important: public participation, quality of public and social services, transparency, and long-term city strategies. Another important topic is public transport.

According to Iveta Kešeľáková of the Bratislava city council, the capital city today has an integrated transport system, shared bikes and cars, modernisation of tramways and several green and educational projects. In addition, it has begun a project dubbed URBAN E for electric cars’ development in cooperation with electricity supplier Západoslovenská Energetika (ZSE).

Bratislava is carrying out the concept along with Ljubljana, Brno, Prague and Vienna. The Austrian metropolis came to the forefront of 2017’s smart city leader board of the global consulting company Roland Berger, followed by Chicago and Singapore.

Poprad is another city communicating with foreign experts. In April 2017, its authorities signed via an intermediary, Solved – The Cleantech Company Ltd., a memorandum on mutual cooperation with the Finish city of Oulu. The first steps of cooperation will focus mainly on the energy and waste areas, as of autumn 2017, according to Wzoš.

“Currently we are preparing a methodology for the building of the smart city in Poprad,” said Wzoš, “We have selected 12 projects inspired by the Finnish city.”

The idea is spreading

Other cities are also following the trend. While Kežmarok has already introduced the idea, Banská Bystrica has been preparing its own draft with the Faculty of Economics at Matej Bel University, according to the city’s spokesperson, Zdenka Marhefková. The city wants to take inspiration in particular from Nordic countries, the UK, France and Austria.

Nitra also presented its first draft of the smart city concept. Andrej Jankovič from the city council described plans to measure the energy burden of public and housing buildings, introduce shared bikes, smart benches, and recharging electric stations, and to expand the supply of electric buses.

Košice residents will, according to the city’s spokesperson Linda Šnajdárová, be able to use the UBIAN app for public transport and a parking system with licence plate recognition. Prešov also wants to address transport issues, the environment, and open self-government, said Veronika Kmetóny Gazdová, spokesperson of the city.

Trnava is now extending its Wi-Fi network, monitoring parking spaces, rubbish containers and e-services for citizens, said spokesperson Pavol Tomašovič. Trenčín, which together with Nitra and Poprad is the holder of the SSCC smart city leader certificate, also has preconditions for developing a smart concept.

The cities that want to become smart will probably receive support directly from state authorities. In late June, the government approved a proposal for a pilot support scheme for experimental development and innovations towards the construction of smart cities, written by the office of the Deputy Prime Minister for Investments and Informatisation, Peter Pellegrini.

The scheme will consist of €1 million from the state budget, foreign private grants mainly from North America, open technological centres of corporations, knowledge transfer and the own funds of supported enterprises, as stated in the proposal.

Pellegrini’s office and the Antimonopoly Office are currently preparing the first part of the support. Janka Burdová, spokesperson of that office, explained that they will carry out the support in accordance with the “de minimis” rules, which means that the spending on one entrepreneur cannot exceed €200,000 over three years.

Together with the Foreign Affairs Ministry, the office has prepared a follow-up memorandum of cooperation with the Government of the US State of Virginia. The parties should sign the initial document for the establishment of international cooperation in autumn 2017.

In addition to the proposal and memorandum, the Economy Ministry has prepared a scheme for entry of companies into the pilot testing of smart city solutions that will become effective in September 2017.

Experts, however, think that the authorities should promote not only smart cities but also smaller smart communities. Slovakia is typically a rural country where villages account for 96 percent of municipalities and 44 percent of the country’s residents, said Michal Kaliňák of the Association of Towns and Villages of Slovakia (ZMOS).

“In addition, we have to accept the fact that in Slovakia there are 2,660 villages with up to 3,000 citizens and a total of 140 cities,” Kaliňák told The Slovak Spectator.

Poprad chose its Finnish partner as a model because of its size. Oulu is no megalopolis, offers similar forests, mountains, and mentality of its people, according to Wzoš.

“Because Slovak municipalities are tiny, major city solutions are basically unsuitable,” he said.

According to the Economy Ministry’s spokesman Maroš Stano, worldwide revenues from the concept will jump from $93.5 billion in 2017 to $225.5 billion in 2025. However, building smart cities requires time and residents’ interest in helping manage municipalities. Vienna has been preparing its smart city basic plan for seven to 10 years, said Wzoš.

He added that a good solution tends to build cities not for cars but for people.

“Each smart city plan begins and ends with one sentence – it’s the matter of the quality of life of ordinary people who live in the city and shape it,” Wzoš said.