Why is the national domain not Slovak?

The internet community is critical of the current system in which the national domain is not in the state’s hands. 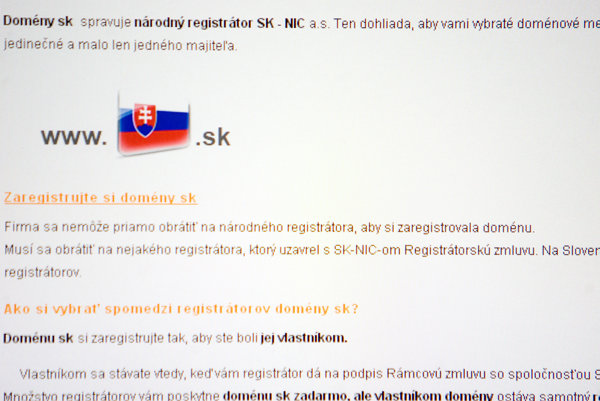 The system Slovakia uses to administer its national internet domain is quite unique in the European Union, but it looks like it will not change soon. On the contrary, the state seems to be preserving the current state widely criticised by the internet community.

The Office of the Deputy Prime Minister for Investments and Informatisation signed an amendment to the contract with the private administrator of the national domain, SK-Nic, on August 4, much to the dismay of several subjects active in the internet environment. Moreover, the company will soon change owners, which in fact means that the domain will be administered from abroad.

“A private company does not have any rivals since the national domain .sk is a monopoly commodity,” Ondrej Jombík, chair of the Association of Webhosting Providers (ZPW) and initiator of the NašaDoména.sk petition, explained to The Slovak Spectator. “It has no reason to improve the services and decrease prices. This has been happening for the past 15 years.”

The situation would be different if the domain were administered by a non-profit organisation established by the state. The state has more control over the organisation, which can carry out actions and use profits only in a strictly defined way, Jombík added.

The history of transferring the national domain .sk into private hands goes back to the 1990s.

At the beginning, the national domain was administered by a group of enthusiasts at Comenius University in Bratislava who were authorised by the state. The administration of the domain with several hundreds of registered users was later moved under dubious conditions and without the knowledge of the administrators’ association to the company Eunet Slovakia in 1999. It later changed to Euroweb. It was bought by DanubiaTel in 2004, and changed its name to SK-Nic, the Euractiv.sk website reported.

DanubiaTel is owned by the Slovak businessmen Juraj and Pavol Ondriš, who have long been involved in the telecom business. Their assets include the Štvorka mobile operator as well as companies Swan and GlobalTel, which have built a system of electronic letterboxes and forms on the Slovensko.sk website for €50 million.

The position of SK-Nic was confirmed in June 2006 by then-transport minister Pavol Prokopovič, who signed a non-cancellable agreement on administering the domain along with it. It stipulated that the company would receive payments for administering the domain, and would not pay anything into the budget. This changed only later, binding SK-Nic to investing part of the money into projects linked to the digital economy, the Sme daily reported. 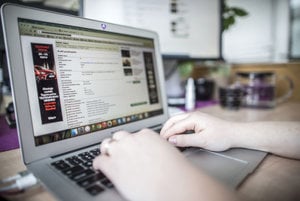 The situation looks like it will not change in the near future. Thanks to the amendment, the legal relations between both parties were clearly defined. Moreover, it secures a fluid and transparent operation and monitoring of the system, said the Office of the Deputy PM for Investments and Informatisation, Peter Pellegrini. The amendment also claimed that the state has full control over the domain’s administration.

But the representatives of the internet community are critical of the new amendment and say the state has lost control over the domain.

“The amendment is disadvantageous for the state and community,” Michal Truban, founder of Websupport.sk and member of the state committee to administer the domain, told The Slovak Spectator. “It is another way of preserving the current state.”

In Jombík’s opinion, it seems that the state accepted the version of the agreement sent by DanubiaTel. Neither the state nor the internet community can influence the prices exclusively set by SK-Nic. The company can also determine the technical contract, which cannot be impacted by the state. As a result, the data of citizens and companies can be exported abroad, he added.

Moreover, Jombík and Truban point to the fact that the contract cannot be cancelled.

They also complain that though they sent detailed comments on the deal, state did not accept them.

Pellegrini’s office, however, claims it had discussed the demands and proposals of various interest groups.

“The statements from the associations of companies trading the registration of domains for the media are expressing their own business and lobbyist interests,” said the press department of Pellegrini’s office, as quoted by the TASR newswire.

Ondrej Macko, editor-in-chief of the TouchIT.sk website, opines that the amendment improves the state’s position. In theory, the agreement can be cancelled. Moreover, it defined contractual fines, and prevented the domain from being abused, he told The Slovak Spectator.

The internet community is also critical of the recent change of SK-Nic’s ownership. The Ondriš brothers first transferred it to a Dutch firm they founded in December 2015. Most recently, they sold it to the CentralNic Group for €26 million. The company will now pay only €21.27 million. The payment of the remaining sum will depend “on how growth targets are met in the next three years”, Sme reported.

ZPW says that the sale of the national domain abroad had been planned for some time. The association also opines that it could happen only with the active support of Pellegrini’s office, which accepted the conditions of SK-Nic’s owners and signed the disadvantageous amendment to the existing contract with them.

“If the only aim was to sell the domain .sk abroad, it is regrettable that Peter Pellegrini deceived the internet community associated with the NašaDoména.sk petition,” Jombík said, as quoted in a press release. “By faking his will to cooperate and accept the demands of webhosting providers, operators and other subjects, he eventually laughed at our honest efforts.”

ZPW also says that by selling SK-Nic, the rules set by the international authority IANA were violated, as they require the permission of the local internet community when the national domain is transferred to new owners. Thus the association plans on turning to the International Corporation for Assigned Names and Numbers (ICANN) to check the transfer.

How it should have worked

A national domain being administered by a private company is not unique, though it is not typical for European Union countries. The only state apart from Slovakia where it works this way is Bulgaria.

Observers, however, agree that it would be better if the domain was administered by the state. Jombík named several reasons for this.

One of them is security risk. A private company can turn off the domain anytime it wants, which may cause the failure of important websites belonging to state administration, like Slovensko.sk. This may be done both intentionally and unintentionally.

“Neither of these cases can be prevented as the state cannot control a private company,” Jombík said. “It can only define the conditions in the agreement, which are very benevolent.”

Finances are also a problem. Currently, registration fees are going directly into the coffers of the private company. SK-Nic is profitable, with its revenues growing every year. Last year they amounted to €4.3 million, Sme wrote.

“The money should be used to improve the domain, but the company has neglected this for 15 years,” Jombík said, adding that even though it has to contribute 5 percent of the revenues to community projects, it cannot be proven how this sum has been used.

The system in Slovakia should work similarly to the Czech one, observers agree. The domain is administered by the non-profit association CZ.NIC. The registration of domains is cheaper and the money is returned to the community, which later uses it for conferences or open-source projects.

“It would be ideal if the state had all the powers of the domains registrar,” Macko said. “The domains would be simply registered from the computer without any administrative obstacles, while all registration profits would go to the state.”