But the defence minister denies any crisis. 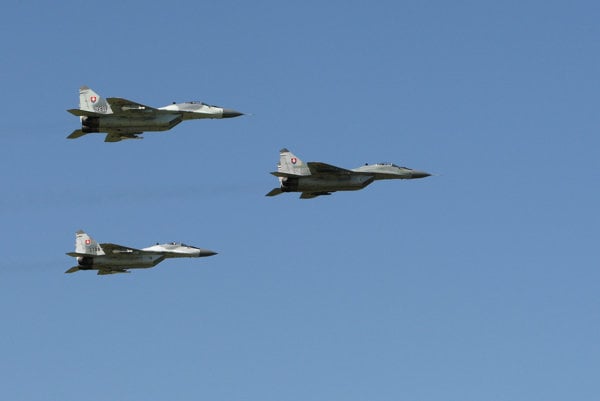 It seems that the coalition may soon deal with another conflict among its members. Defence Minister Peter Gajdoš, nominee of the Slovak National Party (SNS), has decided to postpone the exchange of old Russian MiG-29 fighter planes, criticised by his deputy, Róbert Ondrejcsák of Most-Híd.

Gajdoš also surprised his predecessor Martin Glváč of Smer with this decision, who admits that the government may not support the step. The request for “a European solution” has been recently mentioned by PM Robert Fico (Smer) as well, the Sme daily reported.

Originally, Gajdoš was expected to submit a plan for exchanging the Russian fighters by the end of September. He then decided to ask the government to postpone it until mid-2018.

Instead, the defence minister wants to purchase the armoured vehicles for €1.2 billion.

Ondrejcsák considers Glváč’s decision to go against Slovakia’s interests, explaining that the exchange of MiG planes is in a strategic interest of Slovakia. The first informal talks with the global fighter plane producers started five years ago.

“Postponing the decision to replace MiGs means the prolongation of our dependency on Russia, which is at odds with Slovakia’s European and pro-Atlantic orientation,” Ondrejcsák wrote on his Facebook profile. “I can’t identify with it, neither as an expert nor public person.”

Gajdoš meanwhile stressed that there is no new coalition crisis. Though he feels bad about Ondrejcsák’s statements, he said they have already talked about it. Everybody wants the same: to secure the defence of the country and safety of its citizens, he added, as reported by the SITA newswire.

The minister added that they are searching for pro-European and pro-Atlantic solutions.

“Nobody wants to purchase MiGs,” Gajdoš told the press, as quoted by SITA, while admitting that he also received an offer from Russia.

Slovakia has negotiated with the US and several European countries, including Sweden.

The prolongation of the current agreement on Russian MiG planes is only a plan B. The priority is to purchase new fighters, with the only obstacle being finances, the minister added.

He also said the ministry will continue the modernisation of the military.