What are the prospects of extremists around Kotleba in the upcoming vote? 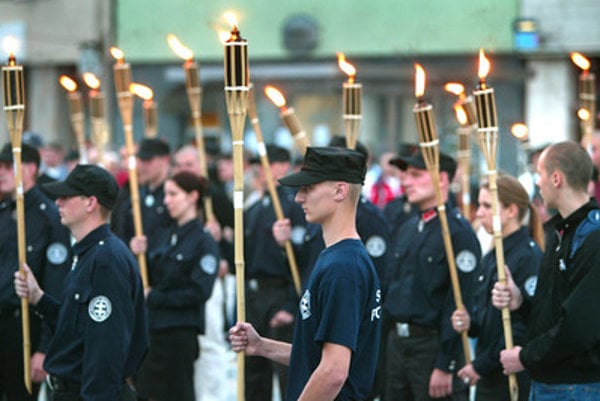 When Marian Kotleba won the regional governor election in Banská Bystrica, people who had been observing the Slovak extremists scene called it the first step for his party into big politics.

Sure enough, two and a half years later, 14 people from the far-right People’s Party - Our Slovakia (ĽSNS), including Kotleba himself, assumed their MP posts. The party then scored more than 8 percent in the national election, leaving most observers of the Slovak political scene astonished, since few of them had expected the party known for its anti-Semitic and racist views to make it that far. Currently, the polls show support for ĽSNS oscillating around 10 percent at the national level.

In the eight regions of Slovakia, the party has candidates who may have a good result in two: Banská Bystrica and Nitra. In all the regions, the ĽSNS is going to try and fill as many seats in the regional councils as possible.

That is one of the reasons why the upcoming regional elections are considered the political event of 2017 in Slovakia. The polls are scheduled to take place on Saturday, November 4, and foreigners with a permanent residence in Slovakia are also eligible to vote. Will the regional polls confirm the power of the extreme right?

“A potential failure in the Banská Bystrica Region may lead to a weakening of Marian Kotleba’s position within the party, which is also why he hesitated with his candidacy for so long,” expert on extremism Tomáš Nociar told The Slovak Spectator.

All eyes on Banská Bystrica

Kotleba was in fact one of the last candidates to announce he would run for re-election, just before the deadline for submitting candidacies in early September. Kotleba was elected to the post in November 2013 with over 70,000 votes (compared to the 26,000 that he received in the first election round two weeks before). He beat the incumbent Vladimír Maňka, a prominent Smer politician.

His victory marked the first time in Slovakia’s post-1989 history that a far-right extremist was directly elected to a high political office.

Despite the growing examples of misconduct from Kotleba’s office, published polls have suggested that he still appeals to a significant number of voters. The interviews the Slovak media have presented in recent months from various parts of the region, demonstrate that the attitude in the region has not turned against Kotleba.

“What we know about ĽSNS voters suggests that they do not perceive the activities of Marian Kotleba as regional governor critically and they are rather inclined to perceive the information about his possible failures as a campaign by the establishment,” sociologist Michal Vašečka from Masaryk University in Brno told The Slovak Spectator.