New type of tulip from the Netherlands decorates Presidential Palace

The tulips are special because of their colour, but what colour is surprise that will be seen in the spring. 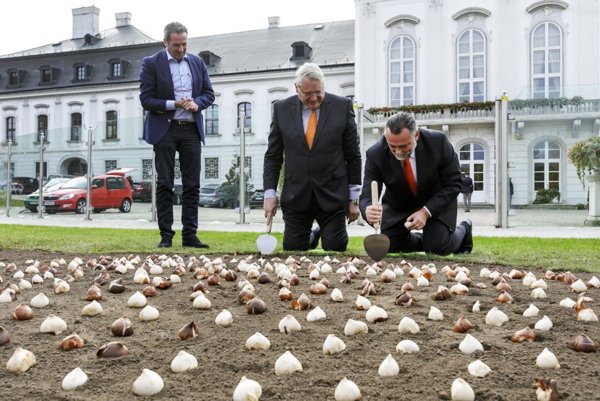 The Embassy of the Netherlands gave a new type of tulip to Slovakia on the occasion of the 25th anniversary of the Day of the Establishment of the Slovak Republic.

Kwast believes that partner relationships between both countries will be deeper and deeper, like the roots of tulips. In total, 2,400 new tulips were planted in the garden.

“They are special because of their colour but I cannot say more at the moment. You will see in April,” said the Dutch ambassador, as quoted by the TASR newswire. Next year, when Slovakia celebrates the anniversary of its establishment and also the anniversary of the first Czechoslovak republic establishment, the tulips should come into bloom. 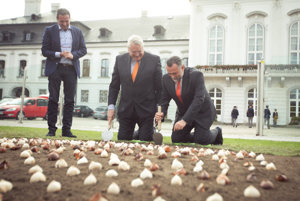 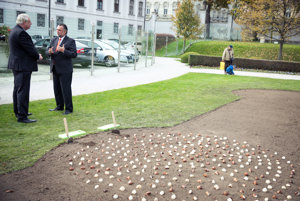 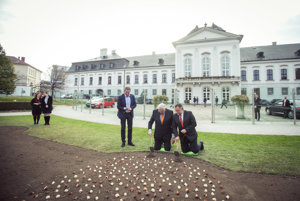 Next year is going to be special, according to the Dutch ambassador, because it will be 25 years since Slovakia’s establishment.

“We cooperated with Slovakia during those years and became important partners. We consider Slovakia to be an active player in the EU,” said Henk Cor van der Kwast for the TASR newswire, adding that they would like to continue in strengthening their common relationship.

The new name of the tulip has been already registered; its name will be announced in the spring of next year when they will come into bloom and public will know their colour.

“The name will be connected to Slovakia,” said Jos Beelen from the Dutch company JUB, a flower breeding specialist , as quoted by TASR.

Breeding new tulips takes several years, according to Beelen. The first blooming comes after ten years followed by several breedings and after a few more years, there are enough new tulips to register an official name.

“Altogether it takes 20 years to offer new tulips on the market. It’s a long time and an enormous amount of work,” added Beelen for TASR.