Villages in the Žitný Ostrov area may find a transportation solution in a new road under the feed channel. 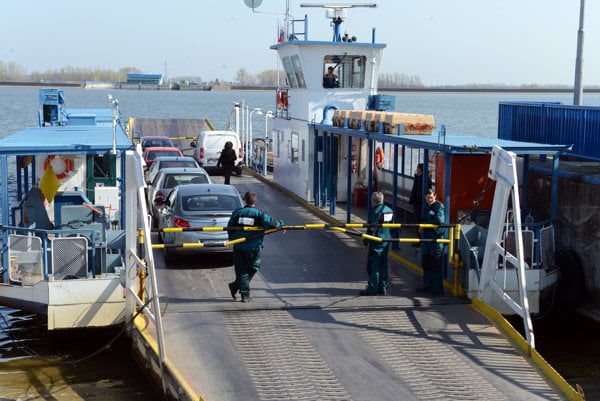 The ferry in Vojka, at Gabčíkovo hydro-power plant could be replaced by an undergound tunnel. (Source: TASR)
Font size:A-|A+2

After the hydro-power plant Gabčíkovo had been built, road access to Bratislava was destroyed or further complicated. Locals were promised the operation of a ferry across the Gabčíkovo dam but this project, largely dependent on the weather, has had repeated technical difficulties. Now, a new option has been presented.

In a few years, villages in Žitný Ostrov near the Gabčíkovo plant on the Danube could get a new road under the feed channel to the power plant.

The construction of a road under the Danube, with separate lanes for cars and cyclists and pedestrians, received the first necessary approvals from experts, Environment Minister László Sólymos and CEO of Vodohospodárska Výstavba (Water-Management Construction Company), Daniel Kvocera, informed the SITA newswire on November 20.

The intention is to rebuild two drainage openings under the supply channel that will converge into traffic tunnels for the public. Such a solution would be faster and more economical than operating a ferry.

“Experts from Vodohospodárska Výstavba and the Slovak University of Technology have analysed the current state of the drainage openings, and the results so far prove that such a solution would be feasible,” Sólymos said, as quoted by SITA.

The construction of tunnels, one for cars and the other for pedestrians and cyclists, could begin in late 2018 or early 2019, he added.