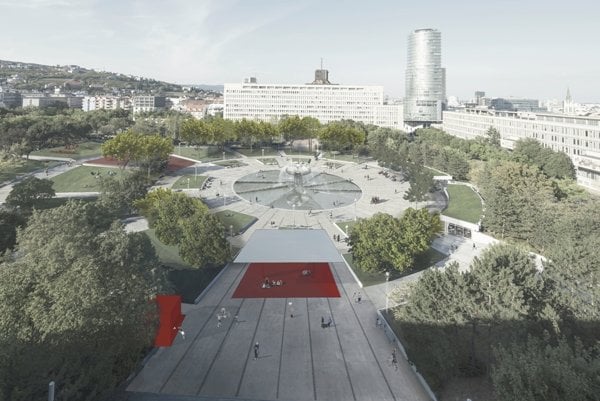 The winning project for revitalisation of Námestie Slobody square (Source: The team of architects)
Font size:A-|A+

Now we know the new look of Námestie Slobody, or Freedom Square. The square will maintain its basic spatial concept with the linden-flower shaped fountain at its centre. Elevated green areas should become accessible and objects should be added such as a tea house, a speech counter and a refreshment stand. This is how a team of young architects proposes redesigning the biggest and one of the most neglected squares in Bratislava. Their project won the architectural competition promulgated by the Bratislava City Council. The council announced its results on 14 November.

“This design persuaded us with its sensitive approach to this location,” said Ingrid Konrad, chief architect of Bratislava and the expert guarantee of the tender. “Sometimes it is better to do less than more, and this proposal responded to our vision in this way.” 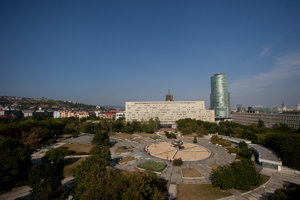 The authors of the winning project are the architects Peter Lényi, Matúš Antolík, Miroslava Daňová, Marián Lucký, Michal Marcinov, Andrej Morávek and Katarína Stanislavová. They approached the revitalisation of the square as its users since all of them live close by and knew it from their studies at the nearby Faculty of Architecture. They like the square as it is and they see its neglected maintenance as the main problem.

“Our primary notion was that we didn’t want to change it at all,” said architect Peter Lényi when explaining the way in which he and his peers worked on the winning design. “For us it would be almost enough if it was in a better technical condition. But when there was the opportunity to propose some changes, we offered an innovative layer in the form of red objects freely distributed throughout the square.”