Blog: Helping others helps your company too

Tatiana Čaplová, Program Coordinator for CSR at the Pontis Foundation, offers a very interesting look behind the scenes of the most successful CSR event in Slovakia - Naše Mesto (Our City). 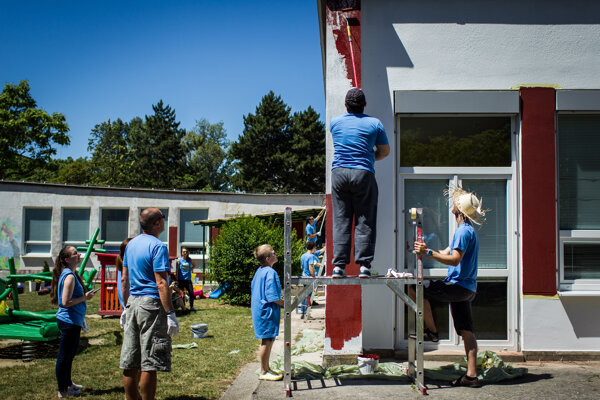 People have always felt the need to belong – to be part of something bigger than themselves. That is one of the reasons why communities were formed. They act as a kind of social glue that keeps us together. Solidarity and loyalty, the opportunity to change the world around us and meet new people, the appreciation of collective effort – all of those factors turn communities into a magnet for talented people who want to escape the hectic individualism of the modern world. This is a fact that companies are constantly becoming more aware of. For them, working with the community works as an excellent tool to improve the society around them, but it also brings the company economic advantages and serves as an effective way of attracting talented young people.

Many people in Slovakia think that the relationship between companies and communities is primarily developed using financial and material gifts. However, the opposite is true. A good example of an ever-growing form of corporate philanthropy is corporate volunteering. It interlinks two important areas of corporate social responsibility since corporate volunteering has a demonstrably positive effect on the employees, their motivation and overall productivity. According to the Cone Communications Employee Engagement Study, which was conducted in 2016, as many as 74% of employees say that they find work for their company fulfilling if they also have the opportunity to work on projects that have a positive social impact. A study conducted by PwC in 2014 states that the employees who are committed to their organizations put in 57% more effort on the job and are 87% less likely to resign. Thus, supporting volunteering brings the company many benefits – it boosts its positive image, increases employee loyalty by connecting company values with their personal values and its cooperation with non-profit organizations opens doors to innovations and unconventional workflow. Volunteering also gives employees a platform to develop their leadership skills in unconventional and fun teambuilding activities.

But how can a company introduce corporate volunteering? And how to improve and extend corporate volunteering programs in companies where they already exist? Our main source of inspiration came from New York more than ten years ago, when our manager Lenka Surotchak attended a large volunteering event called New York Cares. Around 10,000 volunteers participated in the event and together they worked on cleaning and changing their city for the better. This gave us the idea of organizing a similar event in Slovakia. A few months later, we had managed to inspire 13 companies to take part. This original group has since transformed into the Corporate Volunteering working group, which exists within the Business Leaders Forum (BLF), an association of socially responsible companies. The first major activity that we organized focused on restoring the High Tatras after the devastating windstorm in 2004. Later we also established a volunteering event in Bratislava – in 2007, as many as 400 corporate volunteers participated in the first edition of Naša Bratislava (Our Bratislava). Altogether, 20 companies and non-profit organizations participated in the event. Few had anticipated such a positive outcome.

Since then, the event has been renamed to Naše Mesto (Our City) and it has grown into the largest corporate volunteering event in Central Europe. The eleventh edition of Our City broke all records – more than 10,000 volunteers (6000 of which were corporate volunteers) did their part in 52 towns and villages all over Slovakia. Volunteers from as many as 131 companies participated in the event, including 23 CEOs from various companies. When introducing corporate volunteering to a company, support from the management is vital, which is why the top management should lead by example. This is the only way to give the employees a clear signal that volunteering is not just a PR stunt, but primarily a way of promoting company values.

How come Our City has been so successful? Because many companies do not know how to start. They either lack the capacity to manage their own corporate volunteering program or they simply do not know where they could help. Our City offers companies a reliable platform where their employees can try volunteering and get in touch with non-profit organizations, city districts or schools, gaining valuable experience needed to create their own long-term volunteering programs. This actually brings us to the main goal of the Pontis Foundation and BLF – we want companies to realize that volunteering and cooperation with various groups of stakeholders is an integral part of every company’s CSR strategy. I will be very glad if this text inspires you to come to Our City 2018 in June, whether as a newcomer who wants to try volunteering or as a returning volunteer.