The newspaper, which was established as a protest against autocratic power, has been published for 25 years. 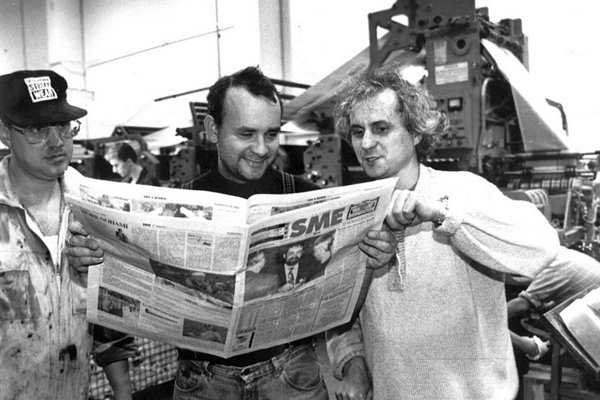 “The Sme daily has spirit – and there is a strong story behind it that is unique and unrepeatable,” publisher Alexej Fulmek said, as quoted by the TASR newswire. “It holds a similar position to the Gazeta Wyborcza paper in Poland. These media forms have become symbols of independent thinking,” Fulmek stressed

The US MLDF foundation included the Sme´s story among the ten most important media stories occurring between the break of the 20th and 21st century.

“In those 25 years, the media world developed into a mature form, and I almost feel like an observer who remembers the whole past,” the publisher, CEO of the Petit Press publishing house, said. “We face new challenges in the digital world, but I believe that the Sme daily can sail through 25 more years of existence.”

Originally, the French media concern Hersant (Le Figaro) daily was supposed to take over the post-communist daily Smena, with the participation of the editorial staff. After the HZDS party and its chairman, Vladimír Mečiar, won the election, they started to take control of media. Smena was meant to be published by a state company, Denník Semna, which would leave the door open for government interventions in the contents of the paper, Sme wrote.

The Denník Smena company was registered on January 1, 1993 but still, on January 4, the news board could not find proof of an entry in the Trade Register.

In January 1993, part of the editorial staff walked out, led by chief editor Karol Ježík, editor Alexej Fulmek (who became publisher) and Jozef Weiss, to establish an independent newspaper. Their financing partner was the group of business people involved with Peter Vajda. On January 15, 1993, the first issue of the Sme daily was published.

In the following years, Sme called on citizens to vote against Mečiar but he won the election and attempted to stop the publishing of the newspaper in all possible ways: by limiting advertising revenues (in which the US foundation International Media Fund Helped), and by refusing to print the paper in the state-owned printing house Concorida and the second Bratislava-based printing house, Danubiaprint. For some time, the paper was printed in the town of Komárno, and then, after receiving a foreign loan, it was published with the help of a printing machine in the Goss Community, and later in its own printing house.

In November 1994, Sme appeared on the internet thanks to the Logos project of the Slovak Academy of Sciences. In 1996, it moved to its own internet domain, Sme.sk.

Then, Sme took over the influential weekly Domino Efekt/Domino Fórum whose editor, Martin Milan Šimečka, became the chief editor of Sme in 1999, after Ježík died in December 1998 due to a head injury. The next year, a German media holding bought a share in the publishing house, and a new Slovak-German company Petit Press, which also publishes a network of regional newspapers, was established. In 2002, Petit Press acquired the Práca daily and merged it with the Sme daily.

In 2003, Petit Press was the second biggest publisher in Slovakia, with a one-third share in the market. In 2009, the German company Rheinische Post bought a 50-percent share of Petit Press.

In 2006, Martin M. Šimečka left for a longer unpaid holiday, later deciding to not come back. Then-head of the foreign department, Matúš Kostolný, became chief editor.

Six years later, the Piano system was founded which allowed visitors to pay for the online newspaper content. Gradually, 12 Slovak websites charged for content with a single joint fee.

In 2014, the Penta financial group announced a contract with Rheinsiche Post on a 50-percent share takeover. This caused the leading editors, chief editor Matúš Kostolný, as well as many editors and staffers to leave. Ultimately, Penta received a 45-percent share, and Beata Balogová, then-chief editor of The Slovak Spectator, became the editor-in-chief.

During 2015, the Sme team was stabilised, and in 2017, the Prvá Slovenská Investičná Spoločnosť (PSIS, the original Slovak group of owners) bought back from Penta five percent more of shares in Petit Press (who have a 60-percent share), in exchange for the sale of Hungarian-language papers Uj Szó and Vasárnap.

Last October, CEO of Proxy Finance and investor and co-founder of Sme, Peter Vajda, died at age 70. His son and successor, Martin Vajda, declared his desire to continue the legacy of his father and support independent journalism.