Sancho from Kysuce shines in Hollywood

Sancho Martin spent his childhood in the northern Slovak area of Kysuce but is now fulfilling his dream in Los Angeles, rubbing elbows with Hollywood celebrities. 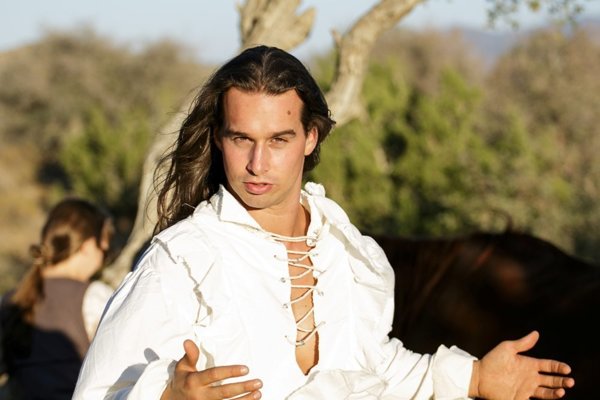 My Kysuce (MK): How did you leave Slovakia, and what was the reason?

Sancho Martin (SM): I first left for the US in 2008 for three months within the Work and Travel programme. Then I studied at Žilina University. I took my visit to the US calmly, as I knew I would return to Slovakia. Two years after, however, I stayed in the US for good. Leaving that time was more difficult for me – but also for my parents. We knew we would not get to see each other for a long time. This was some time in June 2010.

I felt like it was kind of closing one chapter of my life, the Slovak one, and trying a new path, a new life. I didn’t know what to expect but I went for it.

MK: What were your beginnings in the States?

SM: When I arrived in the US for the first time I didn’t speak English and I had little money on me. I kept contacting anyone with my CV and was just looking for any job whatsoever. I came there with no expectations at all. Basically, I didn’t mind doing any job. But after looking for a job for two weeks, I still hadn’t found one. I was running out of money, and so the only thing left to me was to go and dance on Venice Beach. There I joined a group which did breakdancing and acrobatics. I showed the boss there my routines – it was sort of my first casting. He liked my tricks and immediately included me in the formation.

I worked for two weekends with that troupe. I received my first wage for that, I think it was 50 dollars in one-dollar banknotes. Then I changed to another troupe, as the first one left for a tour. With the second one, I kept dancing until the end of my US stay. After about two weeks, we were invited to a talent show of the TV channel Comedy Central. The jury, composed of important persons, evaluated our programme as the best one. I remember that a buddy of ours jumped over the 10 of us in a somersault at the end of the performance. My first official job in a restaurant came only after a month and a half, though. Thus, it was breakdancing that saved me in the beginning of my US stay.

MK: And how did you get into acting?

SM: This happened when a manager addressed me, asking if I would like to try shooting videos, castings – claiming I had talent for that, including the movement. There I got my first chance. Until then, I had never thought I would end up acting.

When I still attended dance castings, sometimes it was about improvising and so it was kind of acting. Sometimes they needed a dancer who could also play various skits. I started to enjoy acting, and I found that I could put more of me into it. Gradually, I started visiting acting schools and going to castings. I enjoy playing a Native American or a fighter. I immediately fell for it but it took about one year before I started to engage more in acting. After this year, I more or less stopped dancing.

MK: But you have not forgotten how to dance…

SM: I am lucky, as I started to do breakdancing at about age 12. It was physically very demanding. My father did powerlifting and I sort of grew up in a fitness gym. I liked it very much. Thanks to this early start, I have preserved all the exercises I learned when I young – and I still use them today. I love music and dance, and this will stay with me forever.

One day of filming in Hollywood....

MK: Let us have a look at your typical day of shooting. For example, you are doing an ad…

SM: It all starts with casting. Usually, there are two rounds. In the first one, you can meet about 50 – 100 candidates. Especially recently, ads are big on improvisation. Today, for example, I went to a second round of ad casting where I had to cut vegetables as a cook. In the second round, there are usually 5 to 10 selected actors. In the first round, the casting is attended only by a cameraman or a cameraman with a director but in the second one, there are also the main director and producers, with the advertising client. The roles can change quickly, however, and you must be able to improvise. Recently, I went to a casting for a Viking. They told me there, though, to play the role of a masseur in a wellness centre. They change you in a few seconds.

If they like my role, then they will call my agency after the second casting. But I need not be the only one for this role – companies often keep another actor as back-up. They may call me only after another week and only then, I find out whether they really chose me. And I can only be really sure when I am in front of the camera. When I’m going to shoot an ad, I never know, for example, how much I will get for it. It all depends on the fact, too, whether the ad will be broadcast at all, and if not, then I just get the money for one day of shooting. As actors, we keep hearing “No” all the time. Often, you are not selected.