Valček Interview: With Ján Kuciak, we got to the Mafia through Trošková

Reporter of the Sme daily Adam Valček initially cooperated with Ján Kuciak, the murdered journalist, on the case of Italian Mafia. 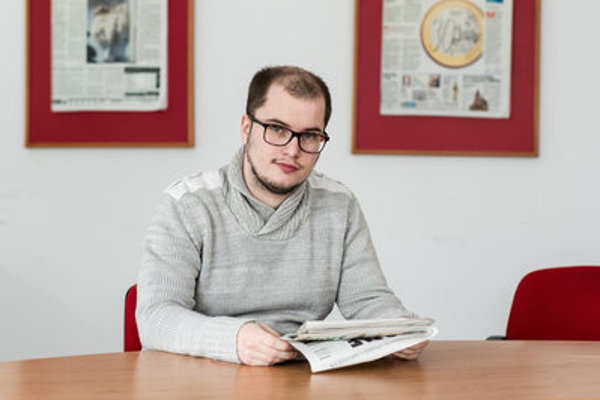 Adam Valček has been working for the Sme daily since September 2008, with one break. In August 2014, he left for the Trend weekly but returned to Sme in February 2015 as an economic reporter. He led the department of data journalism and later the economic department.

After the news of the murder of journalist Ján Kuciak of the aktuality.sk website spread, Sme daily’s reporter Adam Valček immediately testified to the police and sought protection. Initially, he worked together with Kuciak on the case which could have been the reason for the latter’s murder. Valček suggests that they started working on the story following a series of tabloid stories on the appearance of Mária Trošková after she took the position of main state executive for Prime Minister Robert Fico of the ruling Smer party.

Sme: How did you learn about the death of Ján Kuciak?

Adam Valček (AV): I learned about it on Monday (February 26) morning from the Denník N daily, while cleaning my teeth. Of course, I could not believe it at first. Then, however, it started to dawn on me that in recent months, Jano had been working on a report on the Italian Mafia with which there may have been a connection.

Sme: Were you quite close?

AV: We had a professional relationship. He was an unpretentious, kind, and just person.

Sme: Why did you go to testify for the police?

AV: When I arrived in the editorial room in the morning, I told my superiors that Jano may have died in connection with the story on the Italian Mafia. My boss Jakub Filo told me to immediately contact the head of the National Criminal Agency, Peter Hraško.

Briefly, I told him what I had been cooperating on with Ján Kuciak. He interrupted and asked me to come in so they could question me further. It lasted for more than two hours and it was agreed with Mr. Hraško that some form of protection or guard would be provided.

Sme: Do you still have that protection?

AV: I don’t want to specify this more in detail but I would like to use this opportunity to thank the police: thanks to them, we were able to sleep peacefully that night, although we were very stressed the whole day. So I can confirm that measures which Police President Tibor Gašpar announced are applied in practice, too.

I was very surprised by the Facebook profiles. They openly lobbied for these MPs. Influential people in Slovakia don’t do this..

Sme: When did the work on the issue of the Italian Mafia start?

AV: Some time at the end of 2016 and the beginning 2017 the media focused on Mária Trošková, and the tabloids especially addressed her appearance and wrote sexist remarks about her work. Around that time, Jano and I started to be interested in who Mária Trošková is and where she came from.

The Trade Register showed that she was in business with a certain Antonino Vadala. If you put the name Vadala in a search engine you can find stories on some Vadalas who are members of a criminal group ’Ndrangheta. Further investigation was not easy, as we could not speak Italian, and at the same time, we had to check what Antonino Vadala and other Italians from the Slovak group have in common with Italian suspects in their homeland.

Sme: How did you handle it?

AV: Ján Kuciak was on very good terms with Pavla Holcová of the Czech Centre for Investigative Journalism and through her, we started exploring what the Vadalas have in common with the Italians.

Sme: What have you found out?

AV: I don’t know about everything, as Ján Kuciak’s investigation continued without me. According to my information, the main finding is that Antonino Vadala who did business with Mária Trošková, is mentioned in one of the court files involving ’Ndrangheta. He is alleged, according to the file, to have arranged something concerning logistics which was discovered by investigators when they wire-tapped his phone. However, Vadala was acquitted of the charges.

Sme: What did these Italians do in Slovakia?

AV: Antonino Vadala has many companies in Slovakia which function here legally. He also has a brother, Sebastiano Vadala, who has been charged with extortion and threatening a farmer in Trebišov. According to the charge, he told him that if he farmed his field, he would cut his throat.

Sme: In which areas do the Vadalas do their business?

AV: They focus mostly on agriculture where they get subsidies from EU-funds which are not bound to activities but rather to the surface area of land. Thus, they get profits regardless of whether they really grow anything. In the past, he has also had activities involving solar power plants which were also subsidised by the high purchase price of electric power, passed on to households through high electricity bills. Apart from this, he also had other businesses which were mapped by Ján Kuciak. So far, we don’t know much about him but we are working on it.

Sme: What role may Trošková have played in this?

AV: I don’t want to answer that.

Sme: Which Slovaks, apart from her, appear in this case?

AV: The main person is Viliam Jasaň, former Smer MP and current secretary of the Security Council of the state and head of the security section at the Government Office. His former MP’s assistant is Mária Trošková. At the same time, he was the co-owner of the security company Prodest, which was purchased by Pietro Catroppa who does business with the Vadalas. The tabloids previously broke the information that it was Vadala who recommended Jasaň take Trošková for his assistant.“

Sme: Journalist Tom Nicholson mentioned, alongside Jasaň, other Smer politicians, like Stanislav Kubánek and Peter Chudík. How are they connected with this?

AV: As far as I know, Ján Kuciak had archives in his computer with Facebook profiles of these Italians. They had open profiles that could be followed. Some time last year, they locked them. Recently, they have been cleaning them of Smer members and other politicians whom they had among their friends.

In the meantime, Health Minister for Smer Tomáš Drucker also disappeared from the profiles, although he used to be a friend of Vadala. Before the 2016 election, one of the Italians published a status in which he recommended that people vote for Jasaň, Kubánek and Chudík.

Sme: Is it common for entrepreneurs suspected of abusing EU-funds to have such open profiles on social networks?

AV: It surprised me a lot. They openly campaigned for these MPs. Influential businesspeople in Slovakia don’t do this. Only recently, some entrepreneurs sporadically owned up to support for a political party. I know by hearsay that Mafia members in the Balkans, for example, guard their privacy less.

Sme: After Ján Kuciak’s death, it turned out that several media organisations and journalists knew about this case. Is it normal for editorial staff to have a tip for a story, work on it for several months and then publish it at some later point?

AV: This happened with Ján Kuciak. Mainly thanks to him, journalists started helping each other with their investigative reports. He did not focus on the commercial side of media and the strive for exclusivity. He was after justice.

Such a degree of cooperation first started with the Panama Papers scandal in April 2016. It is not common but I think it is inevitable – especially in such a small market as Slovakia. Our media organisations don’t have enough money to be enable them to afford to pay strong investigative teams. Thus journalists have to cooperate across media and editorial teams.

On the other hand, I was surprised by how many people suddenly claimed this case as their own. I rather have the impression that these are boastful statements from those in the media that at first associated his death with Marián Kočner and Ladislav Bašternák. They changed their claims only after Tom Nicholson opened this issue in the interview with the Denník N daily.“

Sme: Does Sme currently cooperate with other media organisations on any other case?

Sme. Do you think the murder will be solved?

AV: I very much fear it won’t.

Sme. Have you ever experienced threats?

AV: Threats are common, but they usually involve threats of violence, not murder. In Slovakia, reporters are not shot dead. ’Ndrangheta is able to do that.

Sme: Have you ever filed a criminal complaint due to threats?

Sme: Then, what has been the most uncomfortable situation in your career to date?

AV: The news of Ján Kuciak’s murder on Monday. The message that the murderers sent to journalists is an extremely strong one and everyone tries to handle it in one way, or another. Monday was the biggest fright of my life.