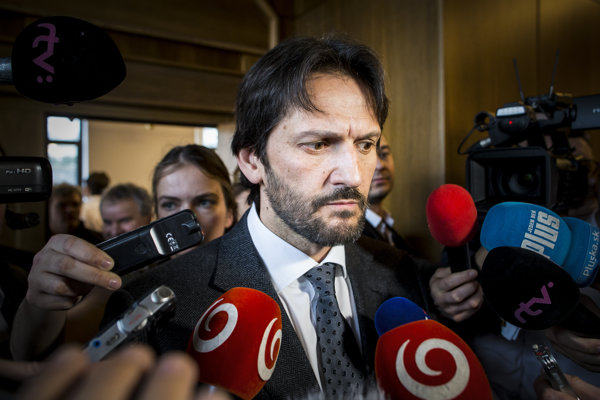 In a whistleblowing act that Slovakia has never seen, prosecutor of the Special Prosecutor’s Office, Vasiľ Špirko, filed a criminal complaint against the interior minister and top police officials.

Špirko is known from the B.A. Haus case, related to the infamous Bašternák scandal from 2016, which he supervised. Following an episode with a witness who testified on alleged fraud at the Interior Ministry, Špirko stood accused of an attempt to exert pressure on the witness. The circumstances of his case have not been satisfactorily explained, and Špirko was recently acquitted of the charges against him.

Now Špirko stepped forward to explain what happened between him and the witness, and how the testimony of that person led to a criminal complaint that they wrote regarding a scheme at the Interior Ministry, related to the purchase of IT and network devices.

“Finally society can understand who governs this state and how, and to whose benefit,” Špirko said, announcing he was filing a criminal complaint against Interior Minister Robert Kaliňák, Police Corps President Tibor Gašpar, NAKA head Peter Hraško, and the national anti-corruption unit head, Robert Krajmer.

The Wallet and Milan

The witness described concrete companies who took part in the order, the persons involved and the relations between them within the scheme.

Špirko says the witness in his testimony brought up two key persons: the first mentioned is Milan (whom he only describes with his first name), who allegedly managed the whole scheme and the persons involved in the order, “a close person of Interior MInister Robert Kaliňák and Finance Minister Ján Počiatek”. Based on Špirko’s account, Milan was in charge of making sure the two ministers would have their interests satisfied. Milan was also close to people at the Government’s Office.

The other person that Špirko mentions as a key person is only nicknamed “Peňaženka” (Slovak for Wallet). Špirko did not give the name of this person as he is not a public figure. The role of this person was to create the transaction history of the money in the books.

Read more articles by the topic
This article is also related to other trending topics: Ján Počiatek