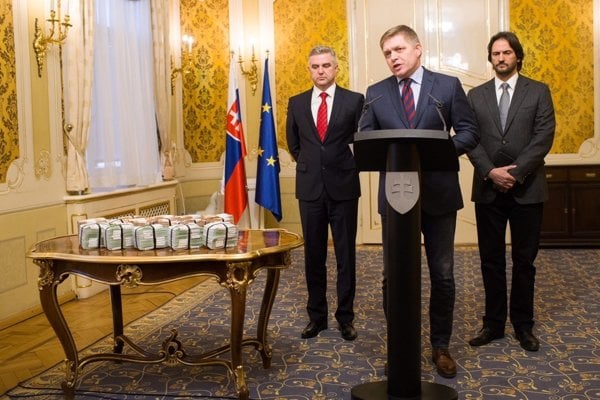 Gašpar, Fico, and Kaliňák (right to left). The one million euros that the government offers for information about the murder is displayed on the table. (Source: Sme)
Font size:A-|A+23

“Fico is using the same arguments as the Hungarian PM Viktor Orbán and the Romanian PM Viorica Dancila,” Portuguese MEP Ana Gomes stated in an interview with the Euractiv.sk website.

The leader of the European Parliament’s delegation to Malta, which followed the murder of local journalist Daphne Caruana Galizia, commented on the current political situation in Slovakia, where Prime Minister Robert Fico is using George Soros as a way to attack President Andrej Kiska.

“She [Dancila] has accused me of being Soros’ foot soldier because I said that judicial reform in Romania is used to restrict the investigation of corruption,” Gomes added.

Parallels between the two murders

The MEP sees several parallels between the murders of Galizia and Slovak investigative journalist Ján Kuciak, whose body was found with that of his fiancée Martina Kušnírová in late February. Both were writing about high-level corruption and organised crime. Both murders were committed by professionals, as is indicated by the first detentions in Slovakia.

Moreover, both Slovak and Maltese prime ministers have offered €1 million for information leading to the killers, according to Gomes, who is a member of the Progressive Alliance of Socialists and Democrats in the EP.

She is convinced that by using the same arguments as Orbán and the Russian President Vladimir Putin, members of the same political family, they only confirm her opinion that they have nothing in common with the traditional issues presented by Socialists and Social Democrats.

“We should first of all fight for human rights and against corruption,” she told Euractiv.sk.

US Embassy warns against conspiracy theories

Meanwhile, the US Government continues to closely follow developments in Slovakia following the murders of Kuciak and Kušnírová. 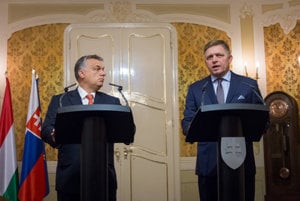 “As Slovak society wrestles with the implications of this crime, we urge all parties to refrain from resorting to the use of conspiracy theories and disinformation,” reads the statement provided to the media by the US Embassy in Slovakia.

The Embassy also informed that the FBI’s Legal Attaché's Office in Prague has offered and is providing assistance to the Slovak authorities investigating this case.

Slovakia has been under closer watch by foreign media as well. They have also observed the responses of the government to the current situation.

French daily Le Monde, for example, described Fico’s behaviour as chaotic. It reported about a press conference to which he brought €1 million in cash which he offered for information leading to the murderers, and also about his attempts to divert attention with an attack on the president using his meeting last year with Soros, the Denník N daily reported. 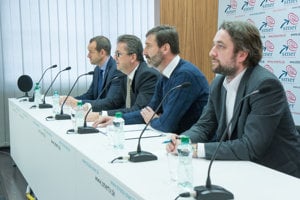 “The Slovak prime minister is facing a real political crisis,” Le Monde wrote, as quoted by Denník N. “He owes it to his citizens, in the memory of the murdered couple and his partners in the EU, to finally protect journalists instead of insulting them and do everything possible to allow responsible access to Ján Kuciak’s murder case.”

The Washington Post daily described in its piece how high-level corruption “has been a scourge for years”, but the misdeeds had not spilled over into bloodshed, until the murder of Kuciak and Kušnírová. It pointed out that whether Fico’s government “can deliver or even survive, is a question that he himself deepened by delving into unsubstantiated conspiracy theories involving a rival politician who happens to be Slovakia’s president”.

“Not exactly a promising start to a criminal investigation,” the daily wrote.

“By pointing to Soros, Premier Robert Fico joins other eastern European leaders in accusing the Hungarian-born financier of undermining their leadership at home,” Bloomberg wrote. “Fico, now mid-way through his third term as premier, rejects calls by the opposition and the president to revamp his cabinet or call early elections after the murder of a reporter sparked mass protests around the European Union member state by 5.4 million citizens last week.”

It went on to report that Fico has “refused to part ways with his close ally”, Kaliňák, which was a demand of the opposition.

“He fought back by accusing his rivals, including Kiska, of using the journalist’s murder for their own political gain,” the newswire added. “The opposition has threatened to call a no-confidence motion this week against the government, that may test the endurance of the premier’s fragile majority in parliament.”

Read more articles by the topic
This article is also related to other trending topics: Ján Kuciak, George Soros