Slovaks are an inspiration for the next generation - and not just in Slovakia, they wrote. 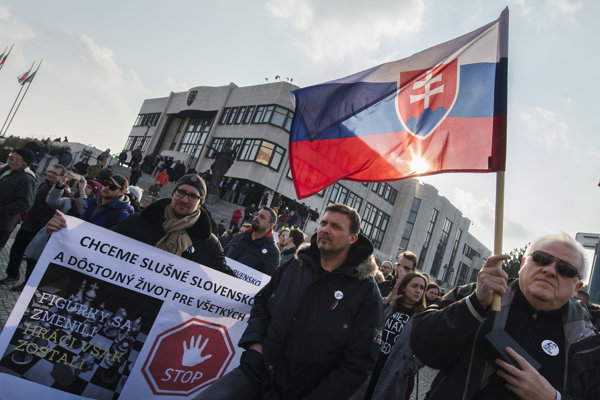 The media in the US continues to closely watch the situation in Slovakia. The renowned news website Christian Science Monitor (CSM), this week highlighted the movement of the young Slovak generation for normalcy and real change, the TASR newswire wrote.

“A youth-fueled movement has already brought down Slovakia’s prime minister,” Sara Miller Llana, Europe bureau chief of this medium wrote in her story on March 28. “But the tens of thousands of protesters taking to the streets aren’t stopping until they see evidence that the changes in Bratislava are not just cosmetic.”

The Christian Science Monitor is recognised for its consistent and objective coverage of foreign affairs and its avoidance of sensational and scandal-oriented journalism. The last time it wrote about Slovakia was in 2016. The topic was the rise of populism and right-wing extremism and the entry of the far-right party of Marian Kotleba into parliament. The author of the extensive article was Sara Miller Llana. Now she has again turned her sights on Slovakia and described it as “the biggest show of people-power since the Velvet Revolution”.

“What began as an outcry over a young journalist’s murder has in the past month morphed into a mass general movement to end cronyism in this post-communist state,” she wrote.

The Washington Post daily in its March 28 edition included in two articles a sharp criticism of the rule of the former prime minister Robert Fico. The first one was written by Griff Witte, The Washington Post’s Berlin bureau chief, and the second one by Jason Rezaian, a journalist who has written about Slovakia several times.

“The peaceful uprising that has transformed politics in this landlocked nation of 5 million is a striking counterpoint to global trends that seem to favour leaders willing to bend rules, norms and institutions to their will,” Witte wrote, mentioning China, Russia, Turkey, the USA and Hungary as well as Poland. In these countries political currents have swung toward consolidated power, nationalist messaging and intolerance for competing voices.

Rezaian cites Peter Habara, editor at Kuciak’s website aktuality.sk, as saying that Kuciak and Kušnírová have left behind an important legacy – they were viciously killed in their own house only because they wanted to make this country a better place.

“One can only hope that their example will serve to inspire the next generation – and not just in Slovakia,” added Rezaian.

Thank you for singing up. Shortly an email will be sent to the address you provided to verify your e-mail.
Error! Please try to register again later, your e-mail was not registered.
Your email is not in a correct format.
Please confirm you are not a robot.
Share on Facebook (84)