We must continue to commemorate what happened during WWII to preserve the values the European Union was founded on, says PM Peter Pellegrini. 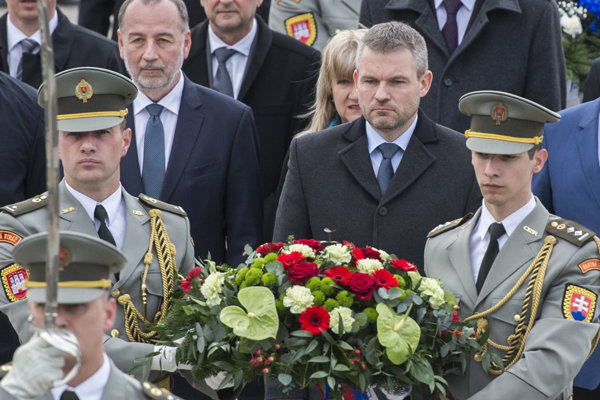 A commemorative ceremony was held at the Slavín memorial to mark the 73rd anniversary of the liberation of Bratislava during World War II on April 4.

Not learning any lessons

Europe has been witnessing a kind of silent renaissance of depraved ideologies returning to politics even though we have been living in peace for over 73 years, Prime Minister Peter Pellegrini said, as cited by the TASR newswire, when laying a wreath at Slavín.

This war memorial commemorates thousands of people who fought for the capital’s liberation, he added.

"Although the European community has formed the basis for democracy and the fundamental human rights of the individual, we are witnessing a kind of renaissance of depraved ideologies that are returning to political life,” said Pellegrini, as quoted by TASR, adding that this trend does not concern only Slovakia, but also other democratic countries.

It is necessary to find out what has been done wrong when a part of the young generation is open to ideologies that have no place in modern times, according to the prime minister.

If society returns to the values on which the entire European Union is founded and keeps commemorating what happened during WWII, the negative trend will be reversed, Pellegrini added.

Other personages celebrated, too

Speaker of Parliament Andrej Danko (SNS), also present at the Slavín ceremony, called on Slovak and European politicians to make their ultimate goal a permanent, sustainable peace. Wars are ongoing even now, and humankind refuses to learn lessons from tragedies, he added, as quoted by the Sme daily. He also mentioned the need for Slovakia to be the bridge between East and West, and for the world leaders to learn how to lead open and friendly dialogue which shall ease the recent tensions. Also, Danko opined that without a strong Russia, global peace is not possible.

The liberation’s anniversary was also commemorated by Bratislava self-administration and representatives of the Regional Committee of the Slovak Union of Anti-Fascist Fighters, invited guests, and Bratislava inhabitants at the Victory Memorial in the Eugena Suchoňa Square.

Bratislava Mayor Ivo Nesrovnal in his address pointed out, according to the Sme daily, that on this day, we commemorate the event which led to the defeat of the worst evil which has ever taken control over Europe. He also paid tribute to all soldiers who fought for our country, and he stressed peace, freedom and democracy which is ever more perceived as something self-evident.