He would like to collect 30,000 signatures – double the number required – but his activities start with a scandal. 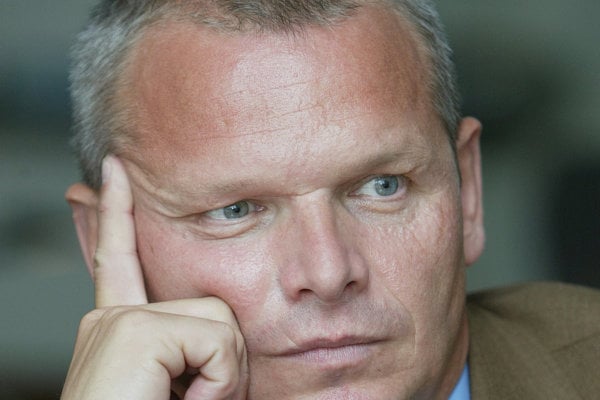 Banker Imrich Béreš has launched his petition campaign, aimed at gaining him support for the presidential candidacy. The result of the petition will decide whether he will run for president, he announced at a press briefing on April 16. If he decides to run he will be a civic candidate, not vying for the support of any political party.

The expenses of the campaign will be covered by himself, he said, as quoted by the SITA newswire, adding that he would not ask the public for any financial contribution.

Originally, members of his petition committee – actor/politician/former presidential candidate Milan Kňažko and Archbishop Emeritus Róbert Bezák – were supposed to participate in the press conference. Béreš explained that due to highly publicised information about his private life, he asked them not to appear. Last week, the Denník N daily broke the news of a medical report, according to which his then-wife Zuzana accused him of a physical attack 15 years ago, when he was drunk.

Béreš denied this firmly, adding that he has consulted lawyers and is considering further steps. He also expressed doubts about the authenticity of the report and added that he does not even know whether his then-wife went to hospital for treatment.

As for his possible candidacy, Béreš commented that he started receiving his first incentives to run one year ago. “I consulted my family, friends and also strangers,” he said, as cited by SITA. “The result is my agreement for the petition to be launched.” Béreš added he would be ready by the autumn to join the contest. He also said he plans to collect 30,000 signatures which is twice the figure required by law.

The banker also answered questions, saying about the much discussed, possible departure of the Police President Tibor Gapšar that this is in the competence of the Interior Minister but if he was Gašpar, he would resign.

The potential candidate has just a small team so far to collect the signatures on the petition supporting his candidacy. He would start building up a bigger team once he has decided to run, Béreš added.

Imrich Béreš graduated in economic studies in 1993-1994 and led the protocol of then-president Michal Kováč. Later, he focused on banking, joined in politics with the ANO party of Pavok Rusko and was an ANO MP until 2003. He then gave up his mandate and became a member of the board of the Prvá Stavebná Poisťovňa (housing savings and loans bank) where he has been active until now. Béreš also studied choreography and is a hobby folklorist.