Luers: Civil society needed more than ever in Slovakia

We need civil society now more than we did in the 1990s, says Wendy Luers, who helped create civil society as we know it in Slovakia today. 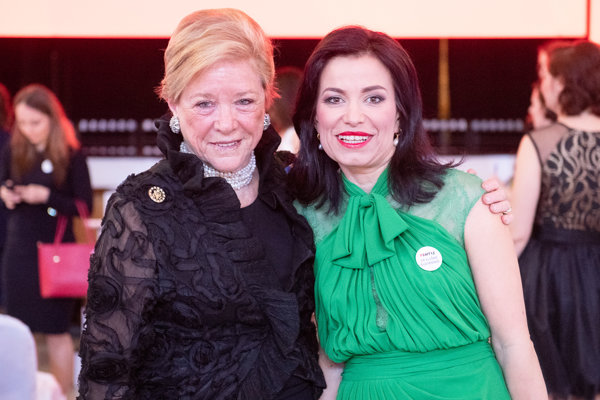 While visiting Slovakia for the Via Bona awards, which celebrates companies pursuing responsible and fair business in Slovakia, Wendy and Bill Luers sat down for an interview with The Slovak Spectator on the day of the award ceremony and discussed the role of civil society in Slovakia.

Wendy Luers (WL): Enormous progress. The Slovaks have always been very open people. We were here during communism and Bill presented his credentials to the Communist Government. During this time, we developed a friendship with Czechoslovak dissidents. Therefore, we were very involved immediately after the Velvet Revolution, when President Havel asked us to bring legal experts and look at the amendments in the Constitutional Law. After the split of Czechoslovakia, Slovakia was about to build many of its institutions from scratch, and we provided expert advisors who helped with the transition. Slovakia had to create a full government, institutions, and also had to try to join the European Union and comply with enormous amounts of regulations, so we consulted the ministers of economy, privatization, the Office of the President, and later on, national and regional institutions. At the same time, we helped develop civil society organizations, such as public policy institutes that focused on economic and foreign policy. The difference between then and now is absolutely phenomenal. When I think about Pontis Foundation, with a budget of €4.5 million a year and a workforce of 40 people, the corporate volunteering event Our Town having nation-wide media coverage and the Via Bona Slovakia award being televised to the nation, it’s just a phenomenon.

TSS: For the most part, Central European countries have built their democratic institutions already. Is civil society as needed as it was in the early 1990s?

WL: I think there’s a greater need. Slovak NGOs were very involved in helping out mobilizing voters of change, which led to the defeat of [Vladimír] Mečiar and our office was the headquarters when the first round of “rock the vote” was created. Mobilising voters and encouraging them to have a voice and to participate was one of the most celebrated missions of civil society in this country. These efforts were funded all along by American foundations, as well as the European Embassies and donors, all of which had very strict regulations and laws about not spending money on direct political activities, so this was done solely as a non partisan effort by getting out the vote, educating the voters on their rights and responsibilities via their role models and peers - with concerts, with bus rides, with marathons, with whatever have you. And then, with the euphoria of seeing the civic voice in action and winning, we knew that the hard work was only about to start – that having some of your former NGO colleagues in the government doesn’t mean you stop being a civil society and not help that government, or criticise that government and expect that everybody is going to do everything you want them to do and hand it right to you.

Today, obviously we’re seeing this huge explosion of civic activity and it is another moment when the country will either take advantage of all these young people on the streets or just let it dribble away. From what we’ve heard and from all the people we’ve spoken with, this seems to be that moment right now.

Founded the Foundation for a Civil Society in 1990 and following the split of Czechoslovakia in 1993, established an office in Bratislava. This office is now an NGO known as the Pontis Foundation. Her husband, Bill Luers, was the US Ambassador to Czechoslovakia from 1983 to 1986.

TSS: Bill, as a former ambassador would you agree there is a greater need for civil society in Slovakia?

Bill Luers (BL): Yes, I think it’s true in general for democracies. Democracies throughout Central Europe and certainly in our country (United States) have governments that are approaching the dysfunctional. They don’t satisfy needs or inspire the population and, in these situations, as a supplement for human condition, you need civil society to help provide the sense of purpose and well-being of the population and so, in practically every part of life, civil society plays an important supplementary role. Civil society can’t be the police force; it can’t build roads. It can’t be the governmental infrastructure or secure the security of the state or even the legal system, but it is very helpful in the fields of education, health, the arts, the environment. These are the issues that hit people where they live and so I agree completely with Wendy that, particularly given the decline of the ability of governments to satisfy the needs of the population, civil society is essential.