Photographer Šymon Kliman comments on his cooperation with the self-governing region and what they have planned for the future. 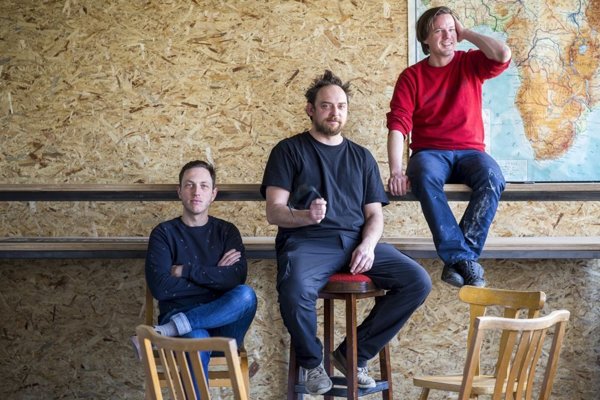 They were unwitting about how unreal their plan was. Artists did not agree with the developer in the (old) Cvernovka complex and could not stay there. They had to move out, and the Bratislava Region offered them the rooms of the former Secondary Chemical Tehchnical School in Račianska Street. They renovated and re-built it themselves and had to learn how to manage the complex economically and bureaucratically. The new / Nová Cvernovka was now been open in its new operation for one year but the cultural centre has a truly difficult period ahead, says one of the initiators of the project, Šymon Kliman.

Sme: Stará / The Old Cvernovka was not specifically organised. Currently, you are one of four artists who joined forces and became managers. Do you feel a bigger responsibility?

Šymon Kliman (ŠK): Enormous responsibility. It is not widely known that Braňo Čavoj and I have mortgaged our property to be able to take out a loan for the renovation of the building. I get annoyed when I think about how many people have received it for free. The Sociálna banka bank helped us a lot in the beginning and gave us complete training. We came with our naïve business plan, perhaps expected when a photographer, a director, a graphic designer and an account manager come to a bank to ask for loan.

We were trained for several months on what to watch out for and how to set up everything. Although the building is still owned by the Bratislava Region, we duly pay the rent from which the investments in the building are deducted. The self-governing region originally wanted to sell the building but failed to do so in four years. When we came here, water flowed in and some parts were flooded and moldy.

Sme: Were you shocked to see this building in such a state?

ŠK: This was the beauty of our naivety. We thought we would just come in and everything would be done easily. The head of the Strabag construction company walked around the building and said: "Guys, don’t be afraid, it’s enough if you procure four million." He came because we asked him for support. And we responded, "Four? We have to do it for half this sum."

And we succeeded. We borrowed €550,000 with two loans we personally guaranteed, and mortgaged our flats. We took out another loan for the renovation of the heating system, which is more of a leasing. The second fundamental source was the support of the VÚB foundation. The rest came from volunteer work and rebates we received for the materials. The estimate of last year’s investment was €980,000, and now we have exceeded a million.

Sme: For a long time, you didn’t know what the deadline was for staying in Stará Cvernovka. Have such fears remained until now?

ŠK: This is a difficult question. In Stará Cvernovka, we were not organised, everything was based on friendships. When the premises were sold, we unified, took the voice of the community, and acted in its name. Here, we already have a rental contract for 25 years. I think it is well-set and we diligently fulfill all our duties listed within it. I have to stress the level of red tape in Cvernovka is enormous.

ŠK: We have to be careful, so that all documents are correct. We have two accountants, and in April, we will have an audit. And we heard some people think we make huge profits here.

Sme: Some politicians said they could imagine a better use for the space. Have they come to look at the space themselves?

ŠK: No, they haven’t. They were not able to sell the space. I wonder how the new city council will react. We already had one presentation lasting for two hours, concerning mostly tourism, and there was no time for debates. We should bring city councillors her every month to show them what is happening here, how communities engage here, and how we develop the environment. We try to find out how our impact on the environment and neighbourhood can be measured and what our contribution is. We inquire what research would be necessary.

“Developers wanted to renovate the old Cvernovka, and to rent it for huge money. They didn’t want artists and lively people there. We negotiated with them for three months."

Sme. What do you see as the biggest contribution of New Cvernovka for its neighbourhood?

ŠK: The difference between old and new Cvernovka lies mostly in the fact that here, we can open up for the public. There, we could not host any events. We gradually try to teach people to come here; this is the plan for the year. We also have artists’ residences here.

Danish artist Mads Floors Andersen came here to work with communities in the building’s vicinity. We want to give space to all and have barbecues, a community garden and children’s parties. Co-working rooms have a daycare for mothers. We also have something called Tabuľa / Blackboard for scientific and educational lectures and LaUrba, which focuses on urbanism and development of Bratislava.

Sme: In March, police searched for foreigners in Cvernovka. Why did they come in the first place?

ŠK: I wasn’t in Bratislava then. The police came based on a fake status on the Facebook site Idem Voliť (I Go to the Election). Someone wrote that foreign nationals are trained here, prepared for a coup, and the next street protest shall be bloody. I think police had to come but I would say they quickly understood that it was complete nonsense and there is no threat luring here, apart from artists and mothers with children.

Sme. Did you go to see the place where Cvernovka used to stand earlier?

ŠK: It’s simply a construction site. Soon, it will be finished and super luxurious offices will be located there. We tried to stay there, negotiating for several months but we found out this was a dead-end street. Developers wanted to repair it and rent out rooms for a lot of money. They didn’t want to have artists and lively people there. We negotiated with them for three months, tried our best but we failed to agree. Now, a new city is growing in that part of Bratislava, and we’ll see how it character develops.

Sme: You were at the meeting of cultural centres in Kiev. What problems do they have?