Women in IT should not be taboo

Girls still have too few idols who have achieved success in the IT sector. 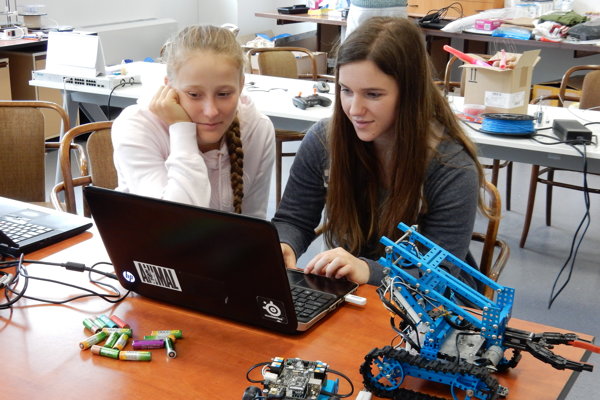 A group of girls sit behind a computer watching flickering LED lights in a strip in front of them. After typing some orders on the computer, the lights start flickering in a different order.

This is how one of the workshops, organised by the non-governmental organisation Aj Ty v IT (You in IT Too) to increase the interest of young girls in IT, looked.

Her peer Jana Šináková adds that it is not hard to learn, even if a person has never programmed anything before. At the beginning of the workshop, a lecturer clearly explains to them what they will be doing.

“It’s more practical, we only have theory at school,” Šináková told The Slovak Spectator.

18-year-old Laura Zolinianská appreciates the fact that they can see the real result of their work. Even though she does not want to study IT, she enjoyed the workshop.

“It’s a great experience for the future,” Zolinianská said.

The share of women working as ICT specialists in Slovakia is the lowest in the European Union, accounting for only 9.2 percent. Moreover, only 12 percent of girls study information and communications technology (ICT) specialisation at the Faculty of Informatics and Information Technologies of the Slovak University of Technology in Bratislava (FIIT STU) and the Faculty of Management and Informatics of Žilina University.

This is why Aj Ty v IT focuses on girls in secondary schools to raise their interest in ICT by showing them how interesting it can be. It is not the only one making an effort, since there are other organisations, companies and universities trying to eliminate the prejudices that IT is more for men.

The atmosphere is changing

Dominika Dolhá is currently in the third year of a bachelor degree at FIIT STU. She discovered her love for programming at secondary school during their informatics lectures.

“I was always happy to start my programme and see the result,” Dolhá told The Slovak Spectator. “Thanks to this I realised that I would like to study this in university as well and when I found out how sought-after IT is, the decision was final.”

In her class, there are another 21 girls of about 180 students.

When Zuzana Šamaj (29) studied the Mathematical-Computer Simulation bachelor programme, there were five girls in her class. On an engineering degree, when she moved to FIIT STU to study Computer and Communication Systems and Networks, they were only two.

She decided on IT specialisation when applying for the grammar school in Žiar nad Hronom. At the time, they were opening the informatics class and because she was good in math, she decided to try it.

“Since we had more informatics than other classrooms, I learned that it is easy to programme something and that I enjoy it,” she told The Slovak Spectator.

Dolhá and Šamaj agree that the situation in society and feelings about girls studying IT are gradually changing. Though it is not surprising to see a girl studying IT, there are still only a few of them, Šamaj said, adding that there are various initiatives trying to change this situation.

This includes universities, which organise various events to attract girls. The schools addressed by The Slovak Spectator agree that the number of girls studying IT specialisations is increasing.