Lajčák speaks with Pope Francis about peace and migration

Lajčák thanked Pope Francis for his service to humanity and his engagement in topics shared with the UN. 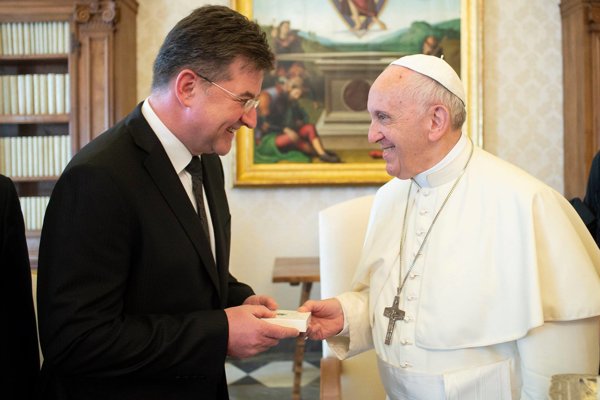 Peace and conflict prevention, migration, the fight against climate change, and sustainable development were the topics that the chairman of the 72nd United Nations General Assembly (UNGA) and Slovak Foreign Affairs Minister Miroslav Lajčák discussed at the audience with Pope Francis. Pope Francis received Lajčák on Monday morning.

"It was an honor to meet Pope Francis at the Vatican today," Lajčák wrote on Facebook. "I was deeply impressed by his charisma, passion, commitment and overall humanity. We had inspiring and intense discussions on our common priorities, including peace, development, migration and climate change. We focused in particular on how all these phenomena affect people. I told him how crucial his voice is, for all of us, and urged him to continue his good work."

Lajčák informed the Pope about steps that the United Nations General Assembly is taking in conflict prevention and highlighted the recent high-level event to build sustainable peace held on April 24 - 25 at the United Nations in New York. He also informed Pope Francis about the work on the Global Compact on Migration, which should be completed during his presidency at the General Assembly and adopted in December, the SITA newswire reported on April 30.

The minister and the Pope also talked about the need to get enough money to fund UN Sustainable Development Goals as well as how to raise awareness of the issue among the general public. They agreed that the maximum effort needed to be taken to prevent human traffickers and smugglers from benefiting from the misfortune of others.