People behind the recent meetings decided to continue organising them on a nationwide basis, with one rally taking place on the eve of the planned wedding of the murdered Ján Kuciak and Martina Kušnírová. 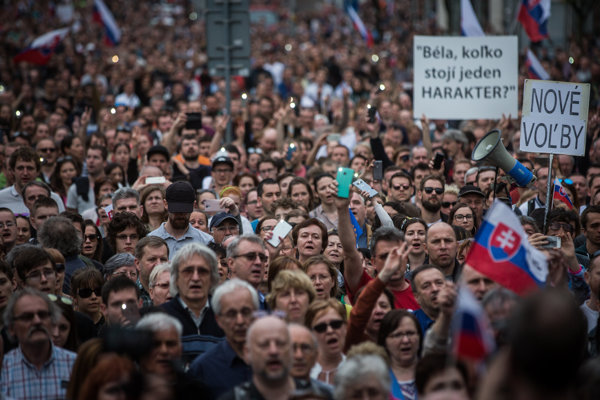 Organisers of the regular For a Decent Slovakia rallies have decided to continue in their civil activities across Slovakia, Martina Strmeňová, Ján Gálik, Karolína Farská and Juraj Šeliga told the TASR newswire May 1, after meeting with other organisers in the town of Banská Štiavnica.

They want to honour the memory of murdered journalist Ján Kuciak and his fiancée Martina Kušnírová on the eve of their wedding that was supposed to take place on May 5, organisers said for the newswire. On Friday, May 4, they will organise meetings in various towns and cities across the country to this effect.

According to the organisers, Slovak farmers are set to join the initiative by taking to the streets in their agriculture vehicles on Friday.

“The For a Decent Slovakia civic initiative calls for a permanent change in the country,” they stated, as cited by TASR. “We realise that it won’t happen in one day, and that is why we will do our best to make Slovakia a better, more just and more decent country, either after an early election or a regular general election. We will point to both nationwide and regional issues, since we’re an initiative of people from all over Slovakia.”

The organisers stressed that politics must be a service to all people.

The gatherings will take place in these towns and cities in Slovakia: