Fire erupted in the High Tatras

Dozens of firefighters and two helicopters came to assist. Big damages are expected. 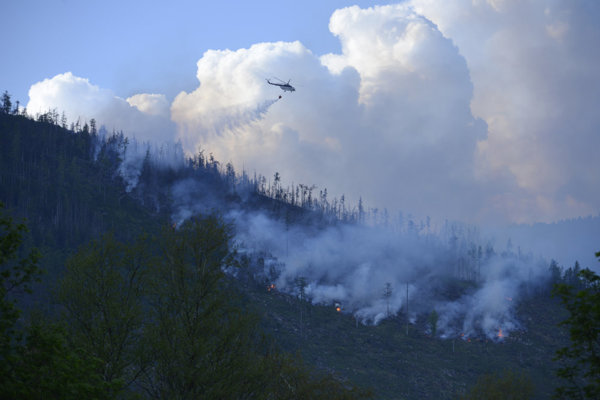 The fire in the High Tatras. (Source: TASR)
Font size:A-|A+2

A 30 hectare forest in the Kežmarské Žľaby area of the High Tatras caught on fire on May 3, shortly after noon.

About 50 firefighters from Kežmarok, Vysoké Tatry, Poprad and Prešov, and two helicopters provided by the Interior and Defence Ministries were employed at the site, said spokesperson for the Fire and Rescue Corps Presidium (HaZZ), Zuzana Farkasová.

The situation is complicated by the fact that the fire erupted in the highest category protection area that is difficult to access and contains strong winds, said Interior Minister Denisa Saková, shortly after arriving in the place, the TASR newswire reported.

In addition, about 800-1,200 tourists had to be evacuated from the hiking routes. The Agriculture Ministry called on people to avoid the locality stricken by the fire. The warning has been issued for Tatranská Kotlina, Kežmarské Žľaby, the path towards Plesnivec chalet and Dolina Siedmych Prameňov valley, TASR wrote. 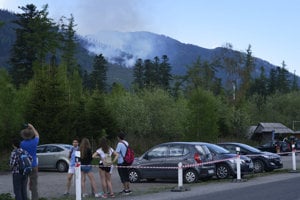 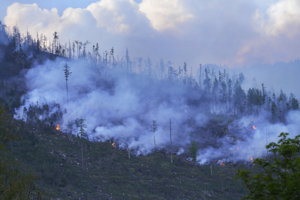 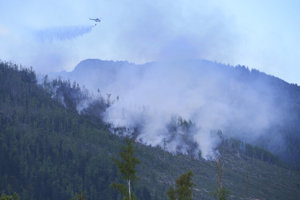 Štefan Bogáčik, a guard of the Biela Voda parking lot, says he's never seen such a big fire in the area .

“Nothing like this has occurred here since the calamity in the Tatras,” he told the regional daily Korzár. “There were some local, smaller fires, but not such a big one.”

He thinks the fire was caused by careless tourists or workers. Pavol Majko, head of the Tatra National Park (TANAP), shares this opinion.

“We have baby animals here,” Majko told Korzár, adding that these include precious and protected birds. “Everything without wings didn’t manage to escape. It will take decades for this part of the forest to recover.”