Record fine for dairy and retailers for anti-competitive behaviour

Rajo was agreeing on prices with retail chains for years 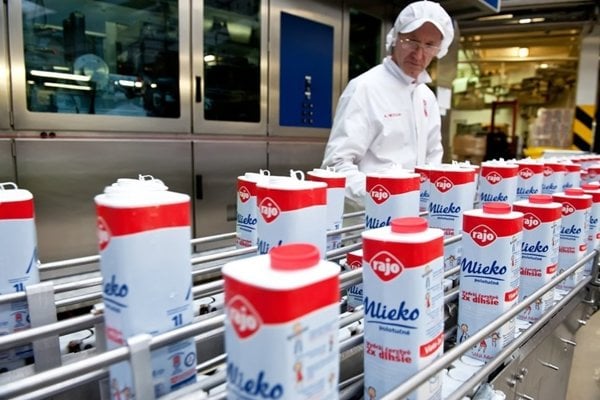 The dominant dairy company Rajo was agreeing on prices for milk, cream and butter with eight retailers between 2008 and 2014. As a result, the prices were very similar in all of their shops. Even the discounted prices were a result of the agreement.

Now the Council of the Antimonopoly Office of the Slovak Republic (PMÚ) has confirmed the first-instance decision of the PMÚ on fines for Rajo and the retail chains Billa, Carrefour, CBA, Coop Jednota, Moja Samoška, Kaufland, Terno, and Tesco, totalling €10.27 million. This is one of the highest fines in the history of PMÚ.

Based on the anti-monopoly authority's findings, the dairy and the retail chains were engaged in anti-competitive behaviour in the form of resale price maintenance.

“Such agreements are prohibited under the Act on the Protection of Competition, in the wording in force until June 30, 2014, and under the Treaty on the Functioning of the European Union,” the PMÚ wrote.

The investigation, launched in 2013, revealed that the Slovak dairy company Rajo was agreeing on the minimal prices of milk, cream and butter with retailers. They usually only pretended to fight for customers when selling Rajo products. Most of the retailers were making price deals with Rajo between May 2009 and February 2014. Moja Samoška joined in April 2013. The correspondence between Rajo and some retail chains indicate that they knew that such an agreement was illegal.

Rajo, as well as seven retailers, still plead innocence and claim the charges are fabricated. They state the prices were only “recommended”. The only one that admitted to the cartel agreement is Billa, which will thus pay only half of the fine.

PMÚ refused to reveal the amount of fines for individual companies since this might enable the sale calculations of the retail chains for individual products. The retail chains consider this to be a business secret. Their fines range between some hundreds of thousands of euros to millions of euros. Rajo's fine is about €4.2 million, the Sme daily estimated.

The verdict is not effective yet while the dairy company as well as the retail chains can appeal it. Rajo is already planning to go to court.