Insurers and the Finance Ministry are haggling over insurance tax

While insurance companies claim that the new tax will increase insurance prices, the Finance Ministry does not see any reason for it. 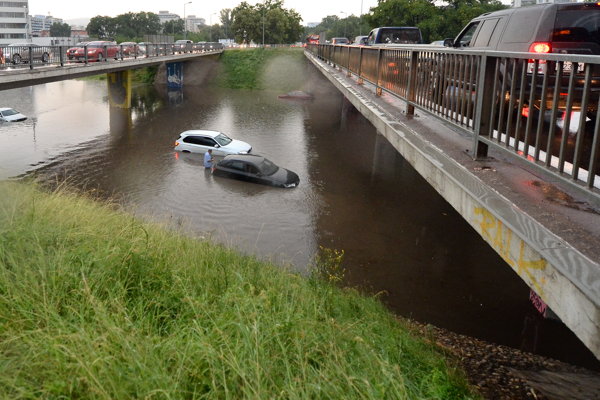 Despite natural disasters Slovakia has been experiencing, insurance penetration of only around 3 percent. (Source: TASR)
Font size:A-|A+

Slovakia has experienced several natural disasters over the last few decades, costing its citizens as well as the state millions of euros. In spite of this, insurance penetration in Slovakia remains low while prospects for its increase are not rosy. This is because the government is introducing a new tax on insurance policies, replacing the existing special levy paid by insurance companies. Experts warn that this change may result in the higher prices of insurance policies.

“As a consequence, insurance will become less affordable for some clients,” said Matej Švidroň, analyst of the Finančná Hitparáda website comparing the offers of financial companies, as cited by the Hospodárske Noviny economic daily, adding that in the case of an unpredictable situation the entire country could lose out due to this.

The Finance Ministry does not see any reason for the higher price of insurance policies.

“Insurance companies should think about whether they want to lose their clients or whether they can instead find ways of coping with the new rules,” said Finance Minister Peter Kažimír.

The ministry has presented several possibilities of how insurance companies can maintain the prices of insurance policies at current levels. They can optimise their operation, reduce costs or reduce their profit. It also points out that, based on the data of the National Bank of Slovakia, profitability of the insurance sector increased last year, the year when insurance companies had to pay the special 8-percent levy.

The ministry further points out that insurance tax is applied in other European countries. The insurance companies do not take this as a logical argument.

“In civilised countries, where such a tax exists, insurees have a different advantage to motivate them to get insured,” said Jozefína Žáková, general director of the Slovak Insurance Association (SLASPO), as cited by the Profit monthly.

The Finance Ministry proposes replacing the 8-percent special levy insurance companies have been paying from each new non-life insurance policy as of the beginning of 2017 with a new 8 percent tax. Parliament advanced the respective legislation to a second reading in mid-May. They are expected to discuss it later in June.

The draft bill is already a concession from the original proposal when the Finance Ministry first proposed the new tax pertaining also to life insurance and rank, depending on the type of insurance, from 0 to 18 percent. After strong criticism it reduced the tax to only the non-life insurance sector and to only one rate – 8 percent.

The government wants to collect €36 million through the new tax. Revenues from the special levy are at about €25 million, i.e. about one half of the revenues the government originally expected, according to the Trend weekly.

The insurance companies continue to criticise the planned change.

“The new tax paradoxically impacts people who voluntarily and thoughtfully bought insurance policies to protect themselves or their property from unpredictable events and so do not fall into the state’s social net,” said Žáková.

SLASPO has launched a campaign called Hands Off! against the new tax, pointing out that Slovakia has one of the lowest insurance penetrations in Europe and one would expect the state to instead encourage its citizens to get insured rather than punish them with the insurance tax, creating the impression that it is a luxury tax.

Based on the OECD statistics, insurance penetration as the ratio of insurance premiums to GDP in Slovakia was 2.7 percent in 2015. For comparison, in the Czech Republic it was 3.2 percent, in Germany 6.3 percent and in the UK 10.4 percent.

“The tax is two times higher than the margin of insurance companies from non-life insurance,” said Žáková, as cited by the finreport.sk website, adding that since the insurers are bound by strict solvency rules based on the EU Solvency II directive, they do not have any other possibility than to sooner or later, increase prices.

Insurance companies estimate the increase in prices by 8-9 percent, while they would agree with insurance tax up to 4 percent.

“Our profit margins are between 4 to 5 percent,” said Martin Žáček, director of the Uniqa insurance company, as cited by the Profit monthly. “Thus, the insurance tax would push us into loss. This is why we have to transfer it to clients.”

In the meantime, its call to postpone the launch of the tax from the beginning of October 2018 to January 2019 was heard. On June 7, the parliamentary committee on finance approved this change.

Insurance companies had complained that they would only have a little time to prepare for the change. Moreover, the introduction of the new tax during the ongoing taxation year would be administratively demanding.

Radovan Ďurana, analyst from the Institute of Economic and Social Studies (INESS) think tank, also points out that revenues from this tax will disappear into the state coffers and would not be used, for example, for flood prevention measures. Thus, the government might use the revenues for the payment of the 13th pension to retired people within its social packages.

Ďurana sees exchanging the special levy with a tax as an increase in the tax burden when not the rate but the tax base is being extended.

Employers’ organisations Klub 500, the Federation of Employers’ Associations (AZZZ) and the National Union of Employers (RÚZ) have voiced concerns that the new insurance tax would increase the costs of all businesses and that this will be reflected in the prices of goods and services.

“On one hand, Klub 500 welcomes the intent to scrap insurance levies, which we perceive as deleterious for insurance policies and the way in which the financial market is currently set, but we strongly disagree with the introduction of the new tax,” stressed Klub 500 executive director Tibor Gregor, as cited by the TASR newswire.

The Finance Ministry does not agree with their claims and says that neither insurance companies nor businesses have a reason to increase their prices.