The prosecutor considers the ruling a victory for truth, courage and decency. 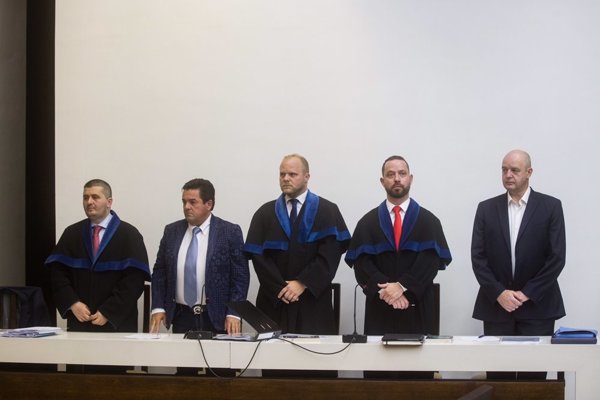 Controversial businessman Marián Kočner was taken into custody on the suspicion of obstructing justice and falsifying promissory notes worth €69 million following the ruling of the Supreme Court issued on June 28.

He was detained in the court room and escorted to the prison in Bratislava’s Judicial Palace, the Sme daily reported. His lawyer plans to submit a special appeal.

Another person suspected in the case, Pavol Rusko, will be prosecuted outside of custody. However, he has a monitoring device and has to report his actions to a supervisor. He has to wear the electronic bracelet for allegedly ordering the murder of his ex-business partner Sylvia Volzová.

“Truth, courage and decency have won,” said prosecutor of the Special Prosecutor’s Office Ján Šanta, as quoted by Sme, “it’s a message for all decent people that justice exists and everyone’s time will come.”

The Supreme Court was deciding on the case after the judge of the Specialised Criminal Court, Roman Púchovský, dismissed Šanta’s proposal to take both Kočner and Rusko to custody. He then appealed to the Supreme Court, and the senate composed of František Mozner, Anna Šišková and Martin Bargel partly accepted it.

Šanta was asking for Kočner’s custody due to the concern that he would continue in his criminal activities. As he explained, the businessman is being prosecuted in three more cases, all of which are related to economic criminality, as reported by Sme.

In the case of the promissory notes, it was a sophisticated crime. It concerns a huge amount of money and there has not been a similar case in the history of Czechoslovak criminology, Šanta added.

On the other hand, they rejected the concern of the prosecutor that Kočner would obstruct the investigation. At the same time, they criticised the police for not carrying out house searches to obtain the originals of the promissory notes.

Why was Rusko released

While the senate accepted the proposal to take Kočner into custody, Rusko will remain free. Šanta used the only argument available for his request: the concern that Rusko would continue in his criminal activities as he is being prosecuted in other cases.

Mozner explained that this was not enough to justify custody as Rusko is wearing an electronic bracelet. Moreover, the court considers his detention “purposeful and non-standard”, Sme reported.

Rusko was detained shortly after his hearing with the police on June 21.

What are the promissory notes about?

The promissory notes first appeared in 2016. They were allegedly issued by Rusko in 2000, when he served as director of the private broadcaster TV Markíza. They were to be used to settle the dispute over TV Markíza with Kočner’s company Gamatex.

The promissory notes suggested that Rusko promised to pay the money as a natural person. However, as he served as the authorised representative of the broadcaster, he signed an amendment that if he failed to do so, the debt would be taken on by the television station.

Neither the police nor the prosecutor’s office believe the explanation and say that Rusko and Kočner signed the promissory notes much later when Rusko had no right to sign documents in Markíza’s name. They allegedly wanted to syphon money from the broadcaster, reported Sme.