Here's why Robert Fico demonises the For a Decent Slovakia protests

Some fear NGOs just like communists feared the scouts. 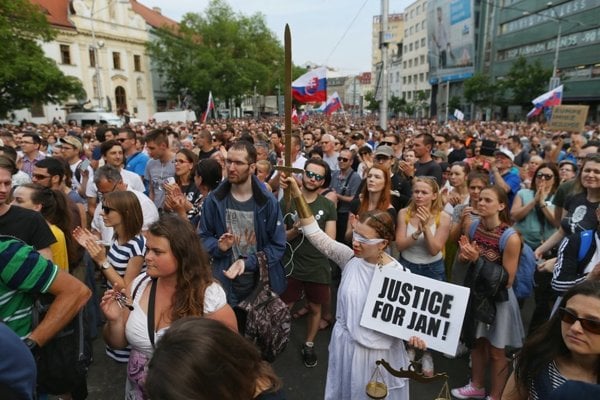 The author worked for the Comenius Institute and she co-organised the For Decent Slovakia marches; currently, she is on maternity leave.

While at college, I worked as a volunteer in a barrier-free (i.e. without any conditions) reception centre/shelter for the homeless. I used to make breakfast for them, treat their wounds, wash greasy dishes after evening soup. The shelter was opened in 2006 in the freezing winter after 18 homeless people died in the streets of Bratislava. The state did not care for them.

The years spent in the Scouts’ movement taught me to help with and have interest in social issues. It was natural for me to operate in the third sector, in non-governmental organisations. I admired their work and the challenges they face, including the neglected development of children from non-stimulating backgrounds, the issue of palliative care for adults and children, the employment of people with physical handicaps, the protection of forests and national parks, and much more.

At first, I was ashamed of working in the third sector when visiting a gynecologist. He examined me, asking what I had graduated in and where I worked. When he heard I work in a non-profit organisation, he laughed and explained to me this is not normal work. Thank God my usual gynecologist does not laugh at me when I lie in front of him with my legs spread wide.

Since then, I have learned to answer the question of where I work by describing our activity: “It is a platform for teachers from all over Slovakia where they get educated and also get support for real changes in their classes.” I started my work while I was finishing my college studies. I worked for €800 as a self-employed person in Bratislava, despite speaking three major languages.

About 18 months ago, I googled the term “George Soros". I did not know who he was, despite operating in the third sector- the third sector which is allegedly all owned by him.

I know how the programme in which I work is financed. I laboriously filled in the applications for grants. I attended meetings with partners whom we begged to offer their services (website creation, graphic layout) to us for free. We are there for teachers, but we do not have so much money to spend. It would be great if the Education Ministry made such reforms that would spare us these small humiliations.

For his part, ex-prime minister Robert Fico says: “Just look at the organisers, one after another, and you will find their connections or directly active work in organisations financed by Mr. Soros.“

By this, does he mean Karolína who is active in a rhetoric hobby club? Or me for working for the Comenius Institute, which is under the patronage of President Andrej Kiska as we all know about his meeting on Fifth Avenue (with George Soros, ed. note)? Or Peter for the fact that 30 years ago, George Soros helped Sme get started? Or young architect Veronika who just graduated from a Bachelor study, or the remaining 70 organisers around Slovakia and abroad? This seems so absurd to me, as if 50 years in future, people in Kenya would see our professor Krčméryho behind everything, and blame him for a coup d’etat.

When there is will and possibility

We often wonder how we've managed it. Yesterday, I realised that at the time of the biggest protest, on March 16, twice as many people were in the SNP Square in Bratislava than at the Pohoda music festival.

If someone told me in advance I should prepare the programme and technical background for such a crowd, I would refuse, even though I arranged for one tent at Pohoda festival in the past. I would think it impossible, not to mention the short time to do so.

Robert Fico talks about it, too: “Shall I say now that it was not like this? That people who organised it, had out of the blue at their disposal everything – money, sound system installation, platforms, snacks – within 24 hours?”