Archbishop: Our society longs for the truth

Thousands of believers gathered for the traditional pilgrimage marking the St Cyril and Methodius Day in Nitra.

Thousands of believers gathered in Nitra on July 5, for the annual national pilgrimage marking the St Cyril and Methodius Day. Prešov Archbishop Martin Ján Babjak celebrated holy mass at the central square in Nitra. In his sermon, he stressed the desire for truth that he feels coming from Slovak society.

The annual pilgrimages marking the St Cyril and Methodius Day started in Nitra in 1990, first at the Calvary hill outside the city centre, TASR wrote. Since 2006 they had been held at Nitra Castle, and in recent years they were moved to the Svatoplukovo Square in the city centre, to accommodate the growing numbers of attending believers.

Every year, holy mass on the day is celebrated by a guest archbishop.

"After the murder of Ján Kuciak and Martina Kušnírová, with the murderer still at large, we no longer want to listen to fairy tales and myths, we want to hear the truth," the archbishop said as quoted by the TASR newswire, adding that society is sensitive about corruption, cronyism, the abuse of the EU funds, fraud, and mafia methods.

"Decent people want these issues to be solved," Archbishop Babjak said during his sermon. "The truth leads us to goodness and honesty. We see the whole nation demanding these values." 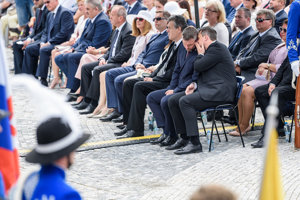 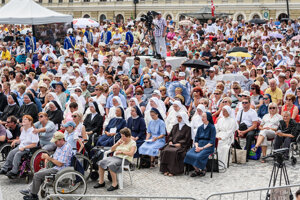 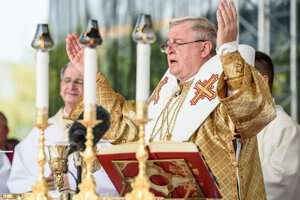 Pellegrini would have liked to hear more positives

Two of the three constitutional officials, Parliament Speaker Andrej Danko and Prime Minister Peter Pellegrini, attended the festive mass in Nitra. Pellegrini in his reaction for the TASR newswire noted that Slovaks often lament and forget to praise the good things that have been done and the Slovak nation which is hardworking, humble, respectful, and friendly. 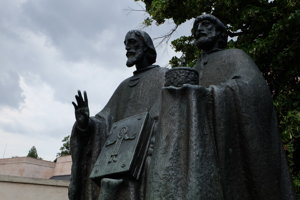 "We have much to be proud of," Pellegrini said, adding that he would have liked to have heard some positives in the sermon during the mass, that would raise optimism in the people.

"Let's tell the truth as it is, let's not change it and let's not cover our eyes from it, but there should also be some hope and some positives sounding from the stages, be it from the priests, politicians, or common citizens," Pellegrini said.

Archbishop calls for a firm voice

Archbishop Babjak in his sermon also suggested that there are foreign forces at work trying to lead the Slovak nation away from the right way.

"Our country needs to hear the firm voice and the powerful example of the missionaries of today, it needs responsible leaders in our country, who care about our people," the archbishop said, so that "nobody can force unacceptable laws on us at the dawn of the third millennium."

"We will not let them force the way we live on us, what our marriages should be like, how many children we can have, how and what our children should learn, whom and what our children should believe," Archbishop Babjak said, and called on people to call things by their right names rather than "pretend to be modern, cultured and civilised, as we fall into a non-culture, new-age paganism that was already uprooted here before, during the Cyrilian-Methodian mission".