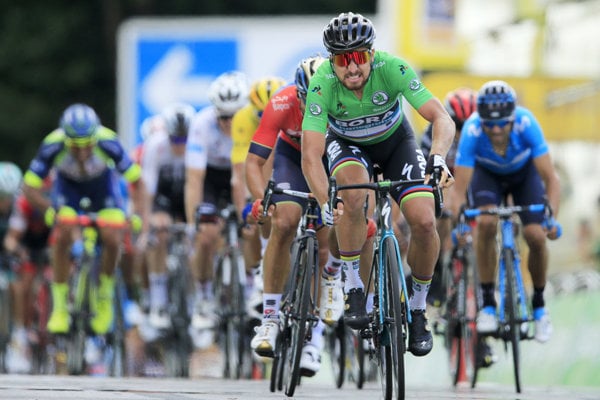 In the fifth stage of the Tour de France cycling race, Slovak racer Peter Sagan had to make sure he didn't underestimate his rivals, the Sme daily wrote on July 11. But once he gave his full effort , they stayed behind. In the finishing area, Sagan beat his chest with both fists. This is already his 10th stage win in Tour de France.

“But today, I was very lucky, too, because Colbrelli was quickly coming close to me,” the Slovak said in his first post-victory interview for the Eurosport channel.

In the fifth stage, he mastered the final ascent excellently, and he did not start sprinting too early. Sagan also thanked his team colleagues and his rival Greg van Avermaet, for starting his sprint too soon and thus helping Sagan and Colbrelli pick it up despite the mild hill in the final phase. Sagan reached a speed of 51.4 km/h.

So far, the Tour is a “two-men show”, Sme wrote, explaining that stage victories, with the exception of the time trial, were equally divided between Fernando Gaviria and Peter Sagan. It is surprising, though, that nobody has been able to beat them, Sme wrote.

In the historical ranking of the number of victories in the Tour, Sagan has placed 25th. Of the currently active cyclists, only three (Cavendish, Kittel and Greipel) beat him, and André Greipel has a mere one victory more than the Slovak cyclist. Former champions – Thor Hushovd, Charly Gaul and Joop Zoetemelk – have the same number of stage wins.

In the number of days in the jersey for winner of points classification, Sagan has beaten one of the records of former German sprinter, Erik Zabel: he has had the green jersey for 90 days, while the German racer, six-time winner of the Tour, only had it one day less.

This stage was visible thanks to a mobile application used by amateur cyclist (Stara), Thierry Gouvenou, who prepared the route, told the Ouest France daily, adding that it was surprising and demanding, with many hidden challenges and opportunities. Sagan likened it to the Ardennes classics, Sme wrote, and he also said he liked it.

On July 12, the stage will again be classical – but even closer to the “Ardennes classics”, with steep hills and a dynamic finish, according to Sme. Sagan is not among the favourites expected to dominate it but he may surprise, as he has done several times before, according to the daily.