The firm is owned by financiers of the Slavia Capital group. 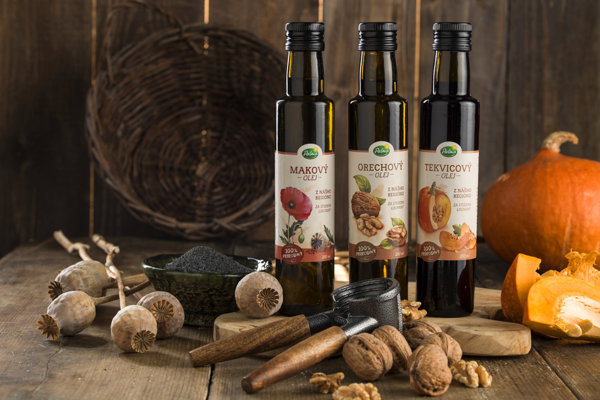 Table oils that have started to be produced in Slovakia, by the iconic Palma company. (Source: Courtesy of Palma. )
Font size:A-|A+

After five years, the once iconic company Palma is re-launching its production of oils in Slovakia.

It wants to start off with specific types for now, namely oils from poppy, nut and pumpkin seeds. In the past, Palma mostly produced common table oils such as rape-seed.

A Slovak product once again

The first oils should have already appeared in the shops this August but as the CEO of the company, Martin Varga, explains, so far it has been a trial period. In practice, the firm will decide, based on trader and consumer demand, how to set future production and which type of oil it will produce in the greatest quantities. It plans to launch regular operations in October.

Palma aims to make oils only from Slovak crop-plants.

After the trial operation, the company will also decide in which city or village it will open its facility which will depend on which product turns out to be the most sought-after.

“We have chosen several localities in Slovakia depending on which type of oil will be produced,” Varga said. “The localities are as close as possible to the main crop-plant.” He refused to specify the localities, saying only that the plant will definitely not open in Bratislava.

At present he does not even want to specify how many new jobs the company will create. Back in 2011, Palma employed as many as a thousand people. Then, over the course of two years, it laid off hundreds of workers, until it ended the production of oil in Slovakia totally. The pressing-shop was moved to the Czech Republic, and crops were supplied by farmers from neighbouring countries.

Thus, Palma oil as a typical Slovak product was ended. Later, the oil was imported to Slovakia to be bottled here. As well as this, baking fats and cosmetics were also made in Slovakia. Last year, around 40 people worked for Palma in this country, according to the financial statement.