Tanks have stripped the regime naked

Communist leaders cared little about the ideology. They only wanted power. 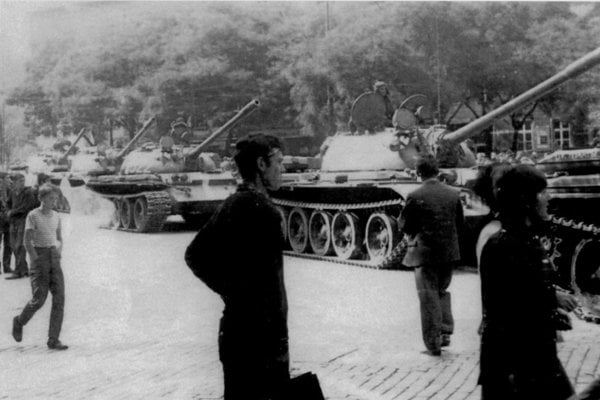 Some events strip regimes naked, down to the bone. They wipe the smiles from the faces of their determined builders, rip off their costumes and bring down the scenery. They take a long time to die, but from that moment on they only grow weaker and live a prolonged and decaying agony. So do their citizens.

The Soviet occupation of Czechoslovakia was such a moment. Marxism had evaporated, its ideology exhausted and all that was left was one party that nourished opportunists. They crawled into their positions, some for their antique fame, some for a price they would not put on display.

On that night in August, many woke up not just from their sleep but also from their illusions and beliefs that the Communist leaders cared about other things than just their own power. At the moment the tanks crossed the borders, it was clear that a regime that allowed this kind of violence against its own citizens would not shy away from many graver crimes.

It would falsify history and spread a culture of snitches, reporting those who would not believe the twisted version it promulgated. It would wage a crusade against truth and ban it from the public gaze, forcing it into the shadows of the living rooms or cellars where a few courageous individuals would meet to write about it to the samizdat.

Those who showed courage in those August days and refused to call the occupation 'friendly help' were down-graded to enemies. They, of course, were given one last chance to take everything back as the folly of youth, a mistake or a momentary lapse of reason.

If they insisted that their resistance against the occupation came from their personal awakening, they were uprooted and literally thrown out onto the street, or into the mines, to try and survive with their truth that contradicted the official doctrine.

Many of them did not want a new ideology, they did not want to be part of another “only” party. They only wanted to be free. But nothing was more dangerous for the regime than this instant desire “to be free" so the Communist Party declared a war against every citizen who wanted to be free and wove their propaganda into schools, poems, novels, songs, and onto facades. Like seasoning that unified the taste of every meal, for the next decades.

But the agony of the regime was irreversible. Despite their attempts to cover the stink of decay with the clove pinks in the hands of children during the Communist parades.

Democracy is fragile, even today, 50 years later, after all the learned or missed history lessons.

It will not be Russian tanks that crush it today. We might lose it gradually, from inside. Based on the same principle as the generations before: a group of those in power will create a state within the state.

They will offer a party doctrine to replace the truth. They will silence critical voices and label those who call out against the abuse of power enemies of the nation. They will create selective equality before the law and claim that they derive their legitimacy from the support of the masses. They will turn democracy into a mere scene and as they will be curbing freedoms, they will add adjectives to democracy such as “illiberal”. But democratic institutions cannot bear to be twisted as the ruling group wishes. Today we are not as powerless as the people who woke up to the roar of the foreign armies on the morning of August 21, 1968. We decide to whom we entrust power.