Rector, minister, president. Why nobody halted the plagiarists’ appointment?

None of the concerned parties see their role in evaluating the moral qualities of the candidate for professor. 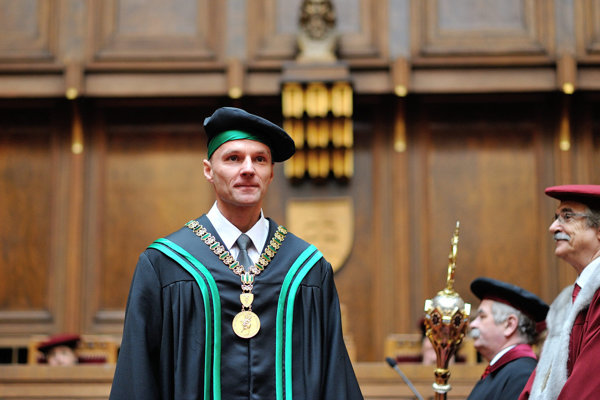 In this story you can read more about:
- how does one become a professor in Slovakia
- how did Comenius University deal with Vanderka's case
- what Vanderka's colleagues say about his plagiarism
- why all the concerned institutions disregarded Vanderka's plagiarised publication in the process

A university teacher facing accusations of plagiarism and violent offence has been named professor. Neither the university, nor the Education Ministry, nor the president, halted his professorship.

Most of the concerned parties claim that they can only look at the formal requirements of the request for professorship, and their competences do not cover ethical issues.

In February 2016, a Bratislava district court dealt with a case concerning the Comenius University Faculty of Physical Education and Sports. They called the dean of the faculty, Marian Vanderka, to testify. Speaking to the court, Vanderka pointed out that one of his colleagues was a plagiarist.

“In line with the university’s Code of Ethics, it is not possible to employ a person who grossly violates the good name of the university,” Vanderka told the court, based on the minutes from the hearing that the Sme daily has obtained.

The professor title is granted for life and it is more a status symbol than a teaching title. Professors are appointed by the president of the republic.

Their status is different to that of professors at universities in the UK, US, or Scandinavia, where the title is a professional one, linked to a concrete position at a university.

Slovak law sees a professor as a person who is responsible for research and education in their field of study.

In November 2016, when the academic senate dealt with his own publication where he and his colleagues copied entire paragraphs without citing their source, Vanderka was less principle-driven. Not only did he see no reason to resign after his plagiarism was proven, but he also launched the process to become a professor.

While Slovak laws do not specify anything about the moral qualities of someone holding the title of professor, President Andrej Kiska, when he recently appointed professors, said that they bear social responsibility.

Vanderka’s case sailed through several Comenius University bodies. Rector Karol Mičieta signed his request to be appointed, subsequently approved by the Education Ministry under Martina Lubyová, and finally President Kiska named Vanderka professor on September 19. All these institutions agree that Vanderka fulfilled all the official requirements.