Parliament: election of Constitutional Court judges will not change

Slovak parliament failed to pass an amendment to the Constitution that would have changed the process of selecting Constitutional Court judges. 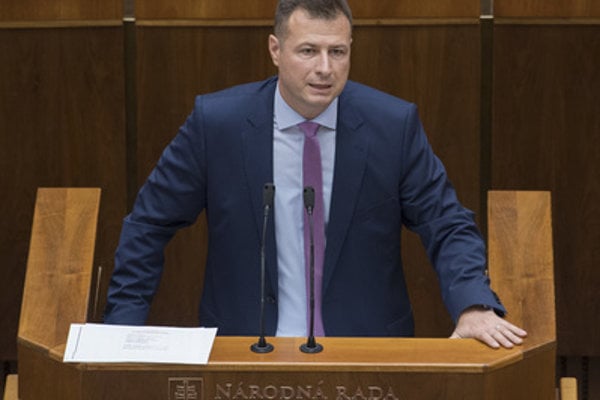 Constitutional Court judges will be elected in the same manner they have been until now, as parliament on October 23 did not pass the amendment to the Constitution that would have introduced several new elements in their election process, the TASR newswire wrote.

A mere 55 MPs from the governing Smer, the Slovak National Party (SNS) and Most-Híd parties voted for the amendment, with several coalition MPs refraining from voting and the opposition not supporting the legislation.

Read also: What do you need to know about the Constitutional Court changes? Read more

The unsuccessful vote was caused by the fact that the MPs, despite their efforts, failed to deal with the effect of temporary provisions even during a second attempt. Only 81 MPs supported the changes, while the minimum required was 90, according to TASR.

Only 55 MPs voted for the law, out of 97 present. Most opposition deputies had left the room before the vote started, the SITA newswire wrote

The draft amendment submitted by Justice Minister Gábor Gál (Most-Híd) was aimed at introducing more stringent criteria for the election of Constitutional Court judges. In line with new qualification requirements, candidates for the Constitutional Court judge would have to be recognised figures in law, and in their previous lives should have provided a guaranteed moral integrity, and that they make decisions impartially and honestly.

Why is it so important?

The terms in office of nine of the court’s 13 judges will expire in February 2019. The MPs will thus have to elect 18 candidates from whom the president will choose nine for 12-year tenures. A simple majority will be enough for a candidate to be approved by parliament.

Following the vote Gál told journalists that he very much regrets that the amendment to the Constitution failed to make it through, as reported by TASR.

Before the failed vote, a crucial amending proposal by Smer MP Róbert Madej passed by 98 votes. It suggested that if the Constitutional Court judge candidate garners at least 90 votes he becomes a judge automatically, without the consent of the president, who would only receive his oath. If there were several candidates, their order – considering the number of votes – would decide.

If, on the other hand, not all vacancies in the Constitutional Court were filled in this way, the second round would bring the demand for the absolute vote of all MPs, with two candidates being put on each of the vacancies, of which president would then elect just one.

Apart from all present Smer (except for Marek Maďarič) and SNS MPs, those of Most-Híd (save Peter Kresák who abstained) approved, SITA wrote on October 24, adding that part of the opposition, namely the ĽSNS caucus, Sme Rodina and three of its renegades, voted for Madej’s proposal.

The failed amendment also touched on the issue of the retirement of judges: it suggested the expiring of the position of a general court judge after the age of 70 has been achieved.

The changed in the Constitutional Court election not being passed is a disappointment, the Via Iuris civic association wrote in reaction. The parliament failed to use the chance to improve the process of picking Constitutional Court judges, they opined, as quoted by TASR.

The preservation of the status quo – which does not require a consensus of bigger number of MPs – leaves space for electing unsuitable candidates just as in the past, Kristína Babjaková of Via Iuris noted, as cited by TASR. She opined that now the threat is the ruling majority pushing through the election of nine Constitutional Court judges loyal to it, thus effectively controlling the court until 2031. This increases the possibility of the trustworthiness of Constitutional Court being threatened.

But the current situation is still better than the original draft amendment that included Madej’s proposal. The chaotic and unprofessional situation that emerged in parliament during the night (October 23) vote on the amendment is not a good message for democracy in Slovakia, political analyst Darina Malová told TASR.

“We have all lost,” she summed up, as quoted by TASR, adding that the result will only lead to the further polarisation of the society.

Political analyst Pavol Baboš pointed out that the ruling Smer party is very well able to secure the number of votes – even by negotiating with the opposition – when it really wants to pass a crucial vote. The party is even able to postpone the vote if necessary, Baboš told TASR, hinting at the law on capping the retirement age, which was postponed to November for a vote in the parliament plenum.

The political analyst suggested that Smer more or less counted on such a result, although the planned changes would best suit the ruling party. However, it might have been harder for Smer chairman (end ex-prime minister) Robert Fico – who is alleged to be eyeing a Constitutional Court judge chair – to obtain votes from 90 MPs, Baboš added for TASR.

The politicising of institutions aimed at maintaining the balance of power in the country and at checking the excesses of politicians continues, the ethics watchdog Transparency International Slovensko (TIS) commented, as cited by the Denník N daily.

Since 2016, the ruling coalition has had power – in the “winner takes it all” style – over the public-service RTVS, the Public Procurement Office, the Regulatory Office for Network Industries and now, it is preparing to enter the National Bank of Slovakia and the Constitutional Court, TIS opined.